Robert Townley prides himself as an efficient and indispensible valet to Phillip, Duke of Bartlett. But when Robert is coerced into teaching the poor children at the duchess' chapel school, he’s out of his element. Thankfully, he has assistance from some of the other servants, including the prickly Miss Brown. Jeanne Brown is lady’s maid to the Duchess of Bartlett. She loves working with the children but can’t abide Robert’s lofty attitude toward them. She’d love to put him in his place — but she needs her job. When the duchess decides to hold the school’s Christmas party in her home, Robert and Jeanne must put aside their differences and work together to ensure that the holiday celebration goes off without a hitch. Will they be able to endure the partnership, or will their sparks ignite something more? 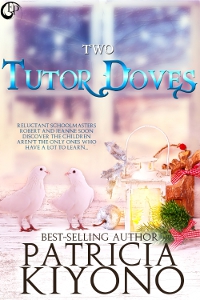 THE WALK BACK to the duke’s rented townhouse was rather quiet. A few years ago, the duke had sold his London home to defray the last of the debt his father had incurred. He and the duchess spent most of the summer and harvest time at Bartlett Manor, his estate in Lincolnshire, coming to London only during the months when the duke needed to fulfill his Parliamentary duties. Until her pregnancy, the duchess had spent her London time with the Ladies Literary Society and writing, in addition to teaching the poor children at the church school.
The group made an odd procession walking back to the townhouse. Robert and Jeanne took the lead, Giles and one of the maids behind them. Normally he would follow his master and mistress, but tonight, as an upper servant of the household, he led the way. He was half-tempted to offer his arm to Jeanne, but thought better of it. They weren’t a couple, and the people behind them weren’t their servants.
Still, the idea of being one half of a couple held a certain appeal. Curious. He’d never given any thought to marriage and a family for himself. Perhaps it was a passing fancy.