Hillary Wilkes, better known as Lary - rhymes with "scary" - is a physically and romantically challenged Over Fifty. Once a big shot producer of a TV cooking show, she is abruptly fired, thanks to one Pamela Effing Griffin. Now reduced to showing real estate condos for ten bucks an hour to Typically Upscale Urban Couples, Lary is overweight and unloved. But never mind. Life is about to change - drastically and hilariously. The romantic misadventures of Lary, her niece, Pumpkin, and her Air Canada flight attendant pal, Becks, with a weakness for musicians, will keep you guessing until the very last page. An LOL tale, UpHill is best enjoyed with a martini and a large pizza. 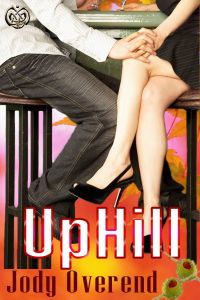 “Ouch!” Hillary, better known as Lary, (rhymes with “scary” she was fond of telling strangers) winced as she tweezed yet another stray hair from her chin.

She peered into the Mirror from Hell, a 7X-magnifying circle of terror, weaving on top of a flexible metal stem like God’s ugliest flower. The base balanced precariously on the edge of a cigarette-burned counter as she sat on the toilet seat, scanning her jaw line for further insults to her fifty-five years.

“Bloody hell.” She tugged on a gold quarter-incher with her fingers. Scrambling for her tweezers, she knocked over her glass of cabernet. “Shit, shit, shit.”

Grabbing the closest towel, she mopped wildly at the spreading wine. After tossing the red-soaked terrycloth onto the bath mat, she stormed from the room.

Without slowing down, she managed to snatch the tabby peacefully sleeping on a rocking chair of cast-off clothes. Pizza, named for Lary’s favorite food, meowed predictably before settling into her arms. For some reason known only to him, he loved the ancient, ratty housecoat referred to by her last boyfriend as her ‘I-never-want-to-be-fucked-again’ outfit.

Lary found on the floor what she was looking for – the rest of the wine. She poured herself another glass with one hand, tossing a month’s worth of tabloids from the sofa with the other. Finally, she managed to arrange both herself and the cat on the down-starved cushions. Without ceremony, the cat kneaded her lap for a moment, dozing back into sleep. Lary sucked back the glass of wine.

Glancing down at her mid-section, she was shocked to the bone. Well, not the bone exactly. More shocked to the fat. How in the hell had she managed to put back all that weight? Her scale must be wrong, surely. After all, it was just a cheapie from the dollar store. But was it possible? She put back those twenty pounds? Again? That would be the fourth time this year! But on the other hand… she calculated on her fingers … she had lost them four times which is eighty pounds! She had lost eighty pounds! Well, that sounds kind of good, doesn’t it? Eighty pounds? That’s like one supermodel!

She took a large gulp of wine to celebrate her enormous loss of eighty pounds.

Now, okay, let’s see though… she had gained it back… oh, shit… four times. Which put her right back where she freaking started a year ago.

A soft creaking sound irritated her ears. Bleary-eyed, she turned her head left to find the source of the annoyance. A fake pine tree listed right, threatening to topple over, dropping all its decorations, such as they were.

She tried to ignore it, lit a cigarette, and leaned back to stare out the tenth floor windows of her one-bedroom apartment facing onto Yonge Street. Wet snow blurred the view. Lights twinkled. And a double line of honking, angry traffic snaked up the slish-slushy slope south of St. Clair on this late afternoon of December 24th, 2004.

So she had lost and gained eighty pounds. What else happened last year? She had applied for 1,437 jobs give or take, ha ha. Her fave application had been to conduct cross country tours for seniors on Via Rail. But the powers that be couldn’t see how being a downsized television producer made her a successful candidate. No imagination, honestly! What were some of the other ones? Long distance truck driver. One teeny weeny problem there – she didn’t have a trucker’s license, but a few lessons could have fixed that, Those people were so rude.

Let’s see, what else sticks out? Landscaper, now that was a cool one. Free exercise, after all. What else? She had considered becoming a hairdresser, a mortician, a pet minister, an electrician. And don’t forget, zoo keeper. The problem was they all required courses, some even college courses, for gawd’s sake!

Lary stroked the cat. Start thinking about your New Year’s resolutions and have them handy for next week. So, okay. Give up pasta? Sure, why not. Give up ciggies, again? Absolutely. Maybe she should give up… alcohol?

The thought made her whole body shudder. Gawd, no. Then she wouldn’t have any flaws at all! And what’s more boring than a goody two-shoes? Little Miss Perfect. Nobody likes that. No, she would keep her one flaw but cut down on the amount. That’s it. She would moderate herself.

She glanced down and caught sight of her hairy legs; she had forgotten to shave. What had happened to her personal hygiene?

Never you mind. Next year will be better. Come hell or high water. New body. New job. Let’s make that, new career. And new man. In that order.

Lary relaxed her head back on the sofa. “Hey, when you’re on rock bottom, Pizza man, there’s only one way to go and that’s up, right?”