Upon This Bank and Shoal: A Novel

Upon This Bank and Shoal, from the author of the much-discussed novel The Haunted Man (1997), deals with the perennial theme of the man-woman relationship in a unique manner. Even in the twenty first century one finds the dreamy man in his desperate quest for lost Paradise and the practical woman in her fight against the inevitable smites of fate. From birth to death, every individual passes through the four stages of childhood, youth, middle age and old age, too anxiously trying to find out the mystery of existence before one's birth and after one's death. Being motivated by sexual instinct, man searches for the meaning of immortality and seeks many ways to attain it. Through a number of allegorical events and episodes, the philosophy behind the Biblical story of Adam and Eve is brought to life; and the word 'Adam' is turned into an equivalent for the Indian theological concept of 'OM', the omnipotent, the omnipresent and the omniscient sound. The fate of man is seriously discussed giving much food for thought, and the underlying dry humor makes this novel an extraordinary experience for every reader.

About the Author:
Born on April 1st, 1952, Alexander Raju began his career as a freelance journalist as early as 1974, after completing his higher studies in the Universities of Kerala and Saugar, Madhya Pradesh. Touring almost every nook and corner of India, he acquired a firsthand knowledge of the Indian ways of life among various ethnic groups who differed totally in their culture, religion and language. When Sikkim became the twenty-second State of India, he joined the staff of Sikkim Express as one of its sub-editors and later became the editor of Bullet, a newsweekly published from Gangtok.
"A decade of my wanderings through the length and breadth of India and my not too brief sojourn in the Himalayan Valley gave me an everlasting mine of ideas and a continuous source of inspiration that would last a whole lifespan of a creative writer," says the author.
Returning to his native state of Kerala, he worked as a lawyer for a short while. In 1981, he joined the faculty of English at Baselius College, Kottayam, his own alma mater, as a lecturer. Currently he is Professor of English in Bahir Dar University, Ethiopia.
Alexander Raju, an Indian English critic, poet, novelist, short story writer and columnist, has many books to his credit. Ripples and Pebbles (1989), Sprouts of Indignation (2003) and Magic Chasm (2007) are collections of his poems. His first novel The Haunted Man came out in 1997. Candles on the Altar (1985), Many Faces of Adam (1991) and The Sobbing Guitar and Other Stories (2007) are collections of his short stories. The Psycho-Social Interface in British Fiction (2000) is a critical work. 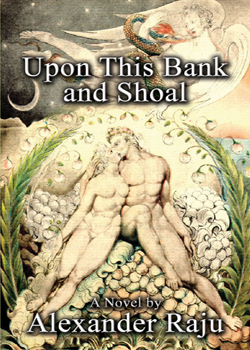 Upon This Bank and Shoal: A Novel