What is the secret of elegant Constanzia Pryce, the Victorian woman who always wears a long veil, and shrouds her face in mystery? When Michael Weston falls in love and lust with Constanzia he soon wants to find out. However obstinate Constanzia is determined Michael will love her for more than her looks, and against his will Michael soon becomes entangled in fetishistic sexual fantasies about his mysterious veiled lover.

What lies beneath that seductive black lace? Will Constanzia fulfil his wildest sexual desires? Michael is soon to find out that seduction is not always just about a pretty face. 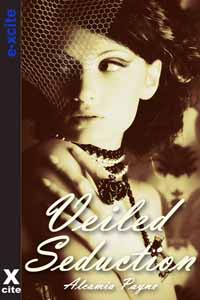 Suddenly Michael was struck by a fascinating thought and his heart spasmed violently. He had an image of beautiful Constanzia lying on his four-poster bed with her plump sensual limbs spread out like an octopus and wearing nothing but the hat and veil. Beneath her dress she’d be exquisite. She was not a slim woman – her arms were slightly chubby at the top, her breasts a little too full from what he could tell and her cheeks, while angular, were like two round peaches – but this did not detract at all though; in fact the fullness added a beauty to her cheek structure. What’s more he’d been struck by a sudden thought. It would be incredibly erotic making love to a woman when you couldn’t see her face or perhaps just see the suggestion of it.
‘Do you enjoy observing the world through a veil?’ he commented.
‘I asked you a question and you didn’t answer it,’ she persisted.
Michael could feel his cock, hard and rampant and somewhat wet pushing against his pants. It was an embarrassing situation to be so turned on in public and yet she did this to him without showing an inch of flesh. He’d seen other women and they’d excited him. The showgirls and the whores who hitched their skirts all the way up their thighs so you could see the dark fringes of their fannies, but never had he been so excited by a woman shrouded in a veil.
He was tumescent, aching, soon he’d have to excuse himself and go and get some light relief. God, that was a filthy idea and now, Lord above, he was imagining fucking her but not in her hole, oh no, that wasn’t perverse enough by half, but in her mouth with his cock wrapped in the veil.
He shivered. He wasn’t a man inclined to kink unless you counted the pleasure he took in rolling down a fine pair of silk stockings and kissing a woman’s legs.
He wondered how she’d appear, completely naked except for the hat. He’d be naked too, naked and leaning over her, salivating from both ends, and he’d be holding his wet cock in his trembling hands and lifting it towards her mouth, that beautiful mouth, seeing her breath gently moving the veil. Christ, why was the possibility of that so arousing?
Before he knew it Michael was drowning in the fantastic fantasy which was Miss Constanzia Pryce. It wasn’t simply the thought of his cock in her veiled mouth that was psyching him up so much, it was the anticipation. When he went to fuck her, would she have on a thick lace veil similar to the one he’d seen her in the other day when her driver had dropped her outside the Paris Ritz and which was so opaque it was like a shield? Or the gossamer fine one she wore today? How fabulous it would be to be fucked by that veil, that sensory glove, maybe even more compelling than a woman’s sex-wet quim. He shuddered in excitement as he realised how much he wanted her and how easy it would be now, having gained an advantage, to cripple that advantage with a misplaced answer to her question.