Lollycocks, Glory Holes And Bears! Oh My! by Astarte

Models Layla and Hyacinth head to Canada for their latest fashion shoot. Out in the wilds, in the company of a group of burly lumberjacks, the girls find themselves being spied on as they shower. What else can they do but teach the men in the most deliciously humiliating fashion that peeping is rude?

Fenella has fantasised about being spanked for a long time, but her partner has never quite persuaded her to act those fantasies out – until they devise the devise the perfect scene. Now she’s the badly behaved student and he’s the teacher who has to discipline her for her lack of attention in class...

Slacking on the job when you’re feeling hot and cranky is one thing. Slacking when you’re in a sex shop and your employer is a hunk with a pair of handcuffs within easy reach is, as Wendy discovers, something entirely different – and much more exciting.

Lady Barrington misses the spankings her husband used to give her before they were married. The behaviour of the servants at their colonial Boston home offers her the chance to hand out a well-earned thrashing, but what will her husband do when he learns she punished the maid without his permission? 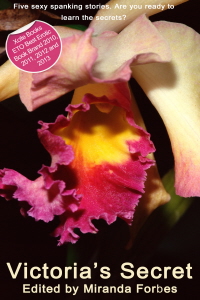 The sight of Alysha masturbating a half-naked girl to screaming orgasm in the stable hay room shocked Riding Mistress Maude.
To her horror, it was Guinevere who was the willing recipient of such lewd attentions from this darkly beautiful daughter of a deceased officer of the Bengal Lancers and his Calcutta concubine.
This was no surreptitiously stolen stable kiss. Guinevere’s riding habit was hitched up over her creamy thighs, her knickers pulled down to bare her rounded bottom. It bucked in fetching provocation; the quivering cheeky curves clenching and unclenching in rhythmic fury, as she responded enthusiastically to Alysha’s finger-fucking. Guinevere’s voluptuous breasts hung free of their constricting bodice and Alysha was tonguing the lust-hardened nipples in hungry debauch.
Maude watched with gut-wrenching jealousy as Guinevere reached a knee-trembling climax beneath the finger squelching lasciviously within her cunt. She came, shuddering to the ecstatic surges that coursed from her inflamed clitoris to every nerve-tingling extremity of her body. Alysha knelt and buried her dark face to Guinevere’s love-lips, her serpentine tongue lapping the sweet flowing nectar of her cum juices.
Guinevere was Maude’s star riding pupil at Victoria’s, the select Academy for orphaned ‘Daughters of Fallen Heroes’ situated off Berkeley Square in Mayfair. Formally opened by Queen Victoria when she was proclaimed Empress of India six years previously in 1876, the Academy charitably housed 30 indigent young ladies aged between 18 and 20, preparing them for a secure, if somewhat Spartan, spinster life as a governess.
An accomplished equestrienne under Maude’s attentive instruction, Guinevere looked magnificent riding side-saddle in Hyde Park’s Rotten Row each morning when they exercised the Academy’s horses. Maude had long secretly lusted to possess her. In the confines of her bedroom above the mews stables behind Victoria’s, she dreamed of tasting the sweet delights of her body, of baring Guinevere’s bouncy breasts and sucking her nipples to excited hardness. She fantasized about Guinevere’s hidden pearl nestling within that lush curly forest now so wantonly displayed before her, dreaming of her becoming her live-in stables assistant, when she would possess her in nightly Sapphic sensuality.
‘Take me! Drink me! I love you!’
Guinevere’s lecherous words galvanised Maude. She burst in, screeching like a banshee.
‘Slut! Temptress! Harlot! Debaucher! Perverted whore! Defiler of womanhood!’ she spat through white, bloodless lips.
She stooped and tore Guinevere’s dangling knickers from her knees. ‘The Governors will hear about your filthy perversion. I shall have you publicly thrashed and expelled for your obscene display of unnatural lust and debauchery.’
Minutes later, the girls were standing in dishevelled shock before Lady Jessica Cleveland, Victoria’s appointed Headmistress. Maude had marched them from the stables in their hay-covered dishabille. Her screaming abuse, their disordered attire and Guinevere’s torn knickers borne triumphantly aloft like a Mogul standard captured on a Punjabi field of battle, left no doubt as to what had transpired.
By the time they reached the Headmistress’s study, Maude had worked herself into a frenzy of moral righteousness.
She threw her captured trophy onto Jessica’s desk. ‘Doing it in front of the horses…Victoria’s dishonoured!…Empire’s Fallen Heroes defiled!…Calcutta concubine!…perverted harlots!.…public thrashing!…expel them immediately!… inform the Governors!…’
She screeched on until lack of breath reduced her to rasping incoherence.
‘That’s enough, Miss Bullen,’ the Headmistress barked. ‘Please be silent!
Maude was one of the crosses Lady Cleveland had to bear when, prematurely widowed by the untimely death of her noble husband on an orchid collecting expedition to Papua, New Guinea, she had sold her spacious Belgravia mansion, bought a smaller property in Mayfair and accepted the gracious royal favour of appointment as Headmistress to the nearby Academy. Unfortunately, Maude came with the job. The founding governors were a cadre of feisty Generals; be-medalled veterans of Imperial forays into the dusty plains of India, the shifting sands of Egypt and the steaming jungles of Darkest Africa. General Sir George Bullen, VC., hero of Napier’s Abyssinian Expedition of ’67 and the Second Ashanti War of ’74 was typical of these. His martial valour had lost him limb and livelihood, but gained him fame, if not fortune, and a place on Victoria’s governing board.
Bullen had promptly engineered his daughter’s appointment as Riding Mistress and now manoeuvred tirelessly to retire Lady Cleveland and appoint Maude as Head teacher.
Given the furore created by Maude’s tempestuous progress from stables to Academy, Jessica had no alternative but to inflict the statutory punishment for ‘immodesty’; a whipping and expulsion. Failure to do so would play into Bullen’s hands; enhancing Maude’s claim to be the Academy’s strict guardian of maidenly morals and jeopardizing Jessica’s position.
‘What have you to say before I punish you?’
Alysha knew her fate. There would be no reprieve from ignominious expulsion. She would be one of Victoria’s secrets. Could she save her sweetheart by accepting culpability, however?
‘It was my fault, Headmistress. I seduced Guinevere. Expel me, but please don’t punish her.’
Guinevere burst into tears at her sweetheart’s brave words.
‘That’s not true! I’m to blame! Punish me, not her!’
The ulcerating acid of frustrated sexual desire and jealousy was now pumping corrosive poison through Maude’s icy veins.

Thanks a Million
Dee Dawning
In Shelf
$4.99
Tweets by
sirenbookstrand