Lisa certainly knows how to make an entrance when she arrives at the prison in an outfit that leaves little to the imagination. Which prisoner is she here to visit? Or does she have an ulterior motive? There’s only way to find out and the prison warden is more than willing to give her his most thorough interrogation ...

One man. Two women. Isn’t that every man’s fantasy? It certainly was Ben’s. So when he finds his girlfriend Una asleep in bed with her best friend Gloria, he thinks all his Christmases have arrived at once. But will the reality live up to the fantasy?

The First Time by J. Johnson

Deanna is daydreaming and sunbathing in an apple orchard in Marseilles when fellow cyclist Paul stops to ask for some water. She didn’t set out for this day to be the one she became a woman, but fate works in mysterious ways and besides, why fantasise about sex when you can have the real thing?

So Come See Me, OK? by Thomas Fuchs

Women can’t get enough of him when he’s on the podium dancing, but have you ever wondered about the man behind the hip-thrusts and the muscles? You might just be surprised. Every stud’s got history and this one involves a glitzy clothes shop in LA and its owner, who is keen to teach him some sexy moves of his own.

They both want to take control when they get to the bedroom, and neither is about to give in without a fight. While the winner’s uncertain, one thing is for sure: this battle is going to be long, hot and hard. The expression goes ‘Make love, not war’, but who says you can’t do both?

These stories have been previously published in a full anthology entitled Sex and Satisfaction. 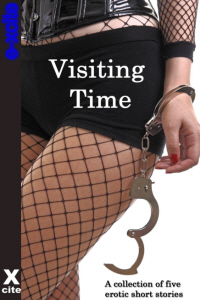 They were walking along a featureless corridor. At the end of it they entered a small, dark room, only one step up from a prison cell.
‘There’s a problem with your outfit,’ announced the dark-haired guard, shutting the door and locking it.
She gazed around the threadbare room, which contained just a table, a chair and a large metal cabinet. A tiny barred window let in a few shafts of daylight, but otherwise all was cold and dank.
‘My outfit?’
Lisa perched on the table and crossed one leg over the other.
She didn’t have to look down to know her patterned stocking tops were back on display. The guard’s puppy dog eyes were hypnotized by her long, slim legs.
It didn’t last. He had a job to do and he was going to do it!
‘Your outfit,’ said the guard, walking over to the grey metal cabinet and pulling open the doors. Dangling from hangers were a number of prison warden’s regulation overcoats. He picked one out and turned back to Lisa. ‘You have to cover yourself.’
‘I hope you’re not expecting me to put that on,’ she said, pouting, Lolita-like, at the hunky guard. ‘Don’t you like the way I’m dressed?’ she teased, her eyes fixed upon the bulge in his trousers. There was no need for him to answer her question, since the ten-inch tent he’d pitched in his pants made it all too clear just how much he loved her slutty attire.
‘It’s not about what I like,’ argued the guard, trying to remain professional. ‘There are guys in this prison that haven’t had sex with a woman for over 20 years. If they see you in that skirt and top, then God only knows what will happen in there!’
‘Oops,’ said Lisa, giggling at the thought, as she jumped down from the table. ‘Have I been a bad girl?’ she asked the guard, stepping right up to his well-built body, before turning round and bending over.
‘It’s not a question of being a bad girl,’ said the guard, trying not to look at her behind. Her skirt had risen high above her waist, revealing the womanly contours of her perfect arse, her tight black knickers cutting into each cheek.
‘Oh, please say I’m a bad girl,’ Lisa begged, stepping forward and leaning across the table, butt exposed to his gaze.
She parted her thighs, allowing the musky scent of the moisture on her knickers to perfume the room.
Closing his eyes, the guard breathed in the tempting, intoxicating odour. This was above and beyond the call of duty. He was used to dealing with hardened criminals, so strange behaviour was nothing new to him. But nothing in his training had prepared him for this.
‘Just put on the coat and you can make your visit,’ said the guard, opening his eyes and holding out the overcoat.
‘No,’ said Lisa.
‘Do as I say,’ the guard insisted, with greater assertiveness in his voice. He was beginning to get angry now, so when Lisa refused to obey again, something inside him seemed to snap.
‘OK, if that’s the way you want it,’ he yelled.
Just as she’d hoped, he whipped his handcuffs off his belt, walked around the table and then drew up the chair. He fixed a handcuff to one of Lisa’s wrists, looped the chain through the slats in the back of the chair, then handcuffed her other wrist, rendering her immobile.
‘Happy now?’ he asked.
Lisa tugged at the chair but couldn’t break free. Lying flat across the table, with her arse poking up in the air, she was completely at the warden’s mercy. Widening her baby blue eyes, she stared over her shoulder at his handsome face, an impudent smirk upon her lips. Catching his smouldering gaze, she nodded towards the baton dangling down from his belt. Unsmiling, the warden reached for the nine-inch rubber crop, then stepped up behind his female captive.
‘You’re nothing but a slut,’ he said, raising the baton shoulder-high and preparing to strike. It fizzed through the air and slapped against her knickers.