Archaeologist Richard Pinn returns to the ruins of an alien city to find out why its vanished race had abandoned him and his female Me'Aukin counterpart. For three hundred years, he and Jamie Brinwall had been little more than artifacts themselves. Humans found them as embryos kept barely alive in cryogenic tanks, but for what reason? Neither Rick, nor his corporate sponsors who intend on re-colonizing the world, are prepared for the truth that has waited for him with an undying vengeance. 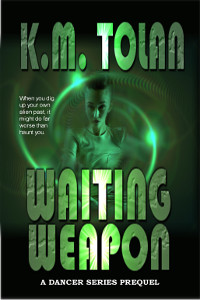 “Steve,” she whispered, her voice going up an octave. “There’s something moving between us and the rover. God, I don’t believe this is happening!”

Rick forced a swallow down his drying throat. Andrea was right. There was motion between two broken columns near the yellow all-terrain vehicle. This was no ghostly figure, though he wished it were. What he saw instead was the hood of a camouflaged oval shell roughly twice the size of a serving platter. It bobbed silently through yellowed stalks of high weeds. He had seen pictures, but never thought he would witness this first hand. “It’s a Me’Aukin mine.”

“It’s not supposed to be here,” she said, shaking her head. “This place is safe. It’s always been!”

Trying to keep his own wits and voice steady, Rick used his helmet microphone. “Major, we’ve got mine activity up here.” Rick glanced around for some kind of cover, spying a dark space beneath a tilted slab of wall they passed earlier. “We’re heading for shelter.”

Rick motioned to Andrea, only to find her staring over his shoulder. He turned around and froze, afraid even to take a breath.

It stood on the trail they just traversed, the lethal relic poised on camouflaged machine legs like a large walking clam. Rick moved to keep between it and her. Blunt twin barrels tracked him from an aperture between the upper and lower shell.

“You’re Me’Aukin,” Andrea said in a slow careful voice. “Try speaking with it.”