Watercolors in the Rain

When graphic designer Eve St. Aubin walks into an art exhibit and finds herself in a heated kiss with world renowned artist Kyle Sebastian, her memories whisk her back to the summer they’d shared five years earlier. He’d been her mentor in more ways than one… until he left without a word. Now she has nothing to say to him… or at least that’s what she keeps telling herself. When he met Eve, Kyle’s career had been in the tank. Lighting the fuse on her talent had rekindled his own artistic ability. Loving her, watching her blossom as a woman had inspired him to new heights. He'd had to let her go back then, but he always knew he'd see her again. Now that he has, he's not prepared for the edgy woman she’s become, nor did he expect he'd still be in love with her.

When explanations aren’t that simple, and no common ground seems to be had, how will they overcome their past to create a future? Or can they? WARNING: Adult themes and contents. 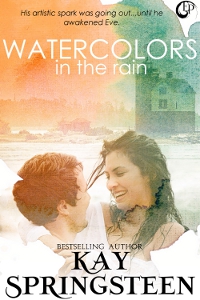 Watercolors in the Rain