We are Who We Are

Hollywood can make or break a girl’s heart—or maybe the girl can transform the city’s canvas itself to paint her own paradise. Struggling young actresses Elizabeth West and Sophie Parker share dreams and a one-bedroom apartment on Sunset Boulevard, balancing day jobs and dates with men who rarely deserve second meetings, in the hopes of escaping to something better in life. But on a hot August night preparing for just such a rendezvous, the girls, already best friends, discover that paradise needn’t be a pipe dream, and that escape is often simply a matter of opening one’s own eyes. 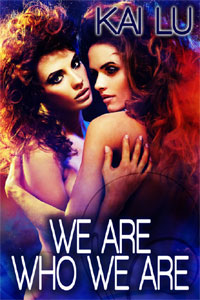 We are Who We Are

Sophie gulped as if consuming her friend’s immensely tangible beauty, her own golden hair reflected in the neon lights of a movie billboard outside to complete the lovely circuitry. She nodded a wordless yours regarding the Marc Jacobs heels, holding her friend’s hands to lead Elizabeth away from the wall and toward the shoes so that she could kick them aside—certainly not as a measure of disdain, but no doubt rather the lengths she would go to stay, as both she and Elizabeth dared not wander beyond their apartment’s threshold in bare feet.

It wasn’t even him.

“I know,” Elizabeth whispered almost soundlessly, standing before her friend like a mirror’s image that captured them both and never wished to let go, for fear of never again acquiring such a reflection. She did know, too, she realized, only fear and guilt confusing the discovery hitherto.

“I want him,” Sophie murmured in near silence, I want him—staring directly into Elizabeth’s eyes with a gaze that the other returned with undivided reciprocity. “I’ve always wanted him, more than I’ve ever wanted anything in my whole life. And I don’t give a damn if he’s poor, Liz, or I’m poor—we’ll be poor together…”

“I like feminine—a lot,” Elizabeth whispered, recalling everything that Sophie had said, and meaning it when she said it, too, even if the phrases were borrowed second-hand. “He wants you, too, Sophie—he’d be crazy not to.”

“He isn’t—” Sophie began, but swallowed the end part of the phrase, closing her eyes and nibbling her lips as if to brace herself for another attempt.

But she didn’t finish her sentence after all, instead replacing words with action to draw her face closer to that of her friend, so that each could now feel every warm exhale that emitted from the other’s lovely mouth.