We Mate In The Dark

Intense love stories, espionnage tales, horror narratives and thrillers in all shades of black, but all dominated by striking sex and sensuality: Jakubowski at his dangerous best.

WE MATE IN THE DARK Abandoned by his girlfriend in a Spanish seaside resort, a desperate man takes drastic action and then embarks on a terrible odyssey of sexual pain and retribution which culminates in one of modern erotica's most horrific encounters on an abandoned beach as dawn breaks.

BY THE SPY WHO LOVED ME A spy travelling on a train towards the Mongolian border evokes the bittersweet and sexy memories of the woman, another secret agent, towards whom he is journeying, in readiness for an exchange where she will be freed and he will take her place as a prisoner.

A PRICE TO PAY A disillusioned Private Eye journeys to Dublin in search of a missing youg woman and his investigation takes him through the city's fleshpots and drinking havens, where he encounters drop-outs, bad men and the terrible Morrigan sisters from Celtic legend. It can't end well, can it?

HER EYES SAID YES He meets Eddie in an airport and they make love. It's the beginning of an extreme relationship that, he knows, leads nowhere. With every new sexual encounter the stakes keep on getting higher and higher until the fatal day arrives where they both cross the threshold.

THE COMMUNION OF BLOOD AND SEMEN She looks beautiful and vulnerable and he falls in love with her with all his heart and body. There is only one problem: she happens to be a vampire and there is only one way he can hold on to her. He travels to Venice where the communion that will change his life forever will take place under cover of darkness.

L'AMERICAINE A beautiful American hit woman travels to Paris with instructions to kill a particularly nasty villain. She tracks him down to a notorious swingers club where he has taken his latest conquest, a young, innocent Italian woman. Where do you conceal a gun when everyone is naked? Can she afford to have a witness to the killing? 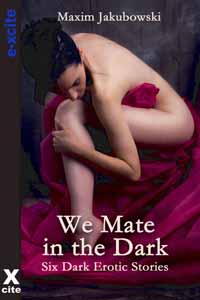 We Mate In The Dark

I move to the bed, pull the cover away from her body. Unveiled, she stretches her long limbs in a semblance of crucifixion. I become hard again. I hoist myself on to the bed and straddle her and offer my cock to her mouth.
The next hours are a sheer catalogue of lust as our frustrations are set loose, and the anger inside us is given free rein and love and hate coexist in the silent light of the moon.
I hurt her.
She hurts me.
We do things we have never done before in a frenzy of limbs, body parts and uncontrollable emotions.
Outside, above the port, the weather has turned. As if in response to us. The night sky falls into the water.
We fall asleep, still embedded in each other somehow, raw flesh joined at skin level, sewn together with secretions and perspiration, intimately blended at primeval level.
The next morning.
Skies outside blue again. Not a shadow of a cloud. Sea birds chattering in the distance.
“I love you.”
“You said you would never do that. You knew I didn’t want it there.”
“I know.”
“But it’s OK. A first time for everything, eh?”
“Does it hurt?”
“Still a little.”
“I’m sorry.”
“You were like a savage.”
“You too... Look, those are teethmarks there...”
“Looks who’s talking... Those bruises will take weeks to fade.”
I sighed as the tenderness rolled over me like giant surfing waves and my stomach tightened at the knowledge this was going to be our last day together and that one day other men would enjoy her as I had, do those terrible things to her too. Worse, that she would enjoy it. Forget me.
I held back a tear.
Looked at her. Her dry lips were twisted in an indecipherable grimace, as if she was thinking the same things as me.
Her eyes filled with water.
I followed suit.
And we fell into each other’s arms, hanging on to each other with desperation.