Tense, involving, Camden’s Knife is a smart near-future thriller with a startlingly real sense of plausibility. In a world that's falling apart, can one ordinary person make a difference? Tremendous stuff! Kavanagh can write!”

– Hugo Award-winner David Wingrove, author of the Chung Kuo series and the Roads To Moscow trilogy

In the second novel in The Macroglint Trilogy set in the near future, Jip Spotswood, our intrepid pop culture reporter, is covering the biggest story of his life. The world has become riveted by a $100 Million Tournament of the game STANDOFF! which is to be held in Prism Resort in Las Vegas, at the same time as the greatest Battle of the Bands contest featuring Pandora’s Obsession vs. Christie Cramer, Billy Blair and the Alliance (CCBBA) in “the biggest rock concert in the history of the Universe.” And Spotswood has a stake in the outcome of both events that could not only change his own life, but the future of America. 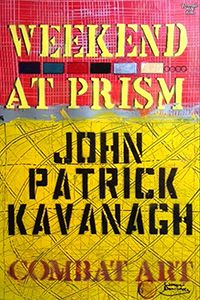 “Welcome back to Fox for our post-game recap covering the second and third rounds of this one hundred million dollar, winner-take-all World Standoff! Tournament. I’m Phil Schuster.”

“Rich, during that ten minute break we just had I read through my notes two or three times trying to break down the twenty contracts from the pair of matches we witnessed this afternoon, and I keep coming back to the same conclusion. For my money, we just saw four world-class competitors deliver possibly two of the…two of the most compelling, expertly executed and most exciting matches ever played, to borrow a phrase from our colleague Jip Spotswood, ever played in the history of the universe.”

“I’d have to disagree with you, Phil. But first, how about those numbers?”

“Those fireworks Mr. Walbee provided an excellent appetizer of a lead-in to our broadcast, along with the fact…well, I don’t know it as a fact, but I’ve got a premonition that a whole passel, maybe even a number of passeli worth of viewers everywhere are getting their New Year’s Eve spreads situated, breaking out ice buckets and beverages of their choice so they can settle in for the upcoming Battle of the Bands concert. I can picture folks gathering around the Sydney Opera House with their picnic baskets to watch it on those huge screens that have been provided for their viewing pleasure and to welcome in the new year.”

“I think they already did.”

“Saw the concert? It’s not starting for another couple hours.”

“No, I meant the new year. It’s already tomorrow in Australia.”