Farrell Hirsch has lived more lives than any dozen of the proverbial rejuvenating cats you've heard about. Not many people can say they've launched multiple national radio networks, worked with the coaching staff of a major league sports team, executive produced star-studded awards shows, been the co-creator of high-tech start up, written a play that played at Lincoln Center, optioned a TV pilot to major production company, and been the CEO of a nationally recognized not-for profit.

Hirsch was one of the people who founded The Ovation Awards, LA's answer to The Tonys. Writing, producing, and lining up talent for those shows for seven years brought him into contact with stars like Charlton Heston, Annette Bening, Carol Burnett, Neal Patrick Harris, Stephen Sondheim, Nathan Lane, Danny Glover, Gwyneth Paltrow, Ben Stiller, and hundreds more.

And then, for no particular reason, since he hadn't really ever worked in radio, he was hired to launch national radio networks, on SiriusXM. The first of these was taking on the inimitable task of turning the world's most visual brand, Playboy, into something viable in the world's least visual medium, radio. The endless drudgery of having to spend countless evenings at The Playboy Mansion parties, of recording Bill Cosby, Etta James, Elvis Costello at the Playboy Jazz Festival, having celebrities like Carmen Electra, Donald Trump, Fleetwood Mac come in the studio, hanging at the Super Bowl with Warren Moon and Lil John was exhausting.

These are his stories… 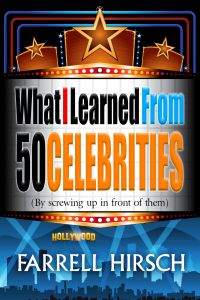 I’m not sure how it happened, but there was this one year we actually scored Nathan Lane to be the host of The Ovation Awards. He was the perfect candidate in that he was a legit Broadway star, he was very well known in the mainstream of entertainment, and best of all, clearly a hugely talented host. I booked most of the presenters that year, but not Mr. Lane. I had no connection to him. But I was responsible once again for writing the script, such as it was—the inane cringe-inducing little patter that is mandatory before announcing a winner.

There is only one rehearsal for an awards show like this. It has to happen when the theatre is dark. And so, the night before the event we met Mr. Lane for the first time. He was running late and not necessarily in the best of moods. Or perhaps it was my fault for not exchanging some pleasantries before jumping directly into business and asking if he had received the script. He said he had, but that he hadn’t read it because he decided “just to hire a real professional to write one.”

That sure felt like a shot at me… at the time.

We moved on to a blocking rehearsal where he was pretty resistant to stage directions that we had prepared… and designed lighting for.

And that sure felt like a shot… at the time.

And about half way through he asked for a break, walked out the back door of the theatre, and didn’t return for the rest of the evening. Remember, this was the only chance any of us had to rehearse.

I called his management and they assured me he would be there the following evening in good spirits and blow the roof off the place. I had little faith. I also had little recourse. We had sold more tickets than ever before and it was at least in part due to his name.

The following evening Nathan Lane showed up on time, I can’t really tell you his mood because I was in a crappy one and stayed away. But I snuck into the back of the house in time to hear, “Ladies and Gentleman, Nathan Lane,” followed by a standing ovation. I learned during that day, that the “real writer” who Lane brought in was Bruce Vilanch. Asking Bruce Vilanch to script your awards show is like asking Sinatra to sing you “Happy Birthday.” The best of the best of the all-time freakin’ best. And he did in his opening monologue the one thing I would never do, the one thing destined to cause audience revolt. A good portion of the monologue was a devastating put down of the very Los Angeles theatre community we had gathered to celebrate—in which the entire audience made both their art and their living. And they loved it!!!!!

I knew instantly that this was much funnier than what I had written for Lane, and much better suited to Lane himself. And if I hadn’t known, the audience response would have informed me quite clearly. Oh, and I also knew that the evening’s program listed me as the writer, so I would still get the credit.

Every single one of my peers was in the crowd that night, and every single one of them congratulated me for “nailing it” and for being courageous enough not to be scared of collective self-deprecation. I told as many people as possible the story about how my work was usurped and bettered by Vilanch and Lane’s cabal. And I tried my best to say it in a way that wasn’t bitterly driven by ego. Though I probably didn’t hide the fact that I was hurt, not by them stealing my limelight, but by the proof that they were right to do it.