When Babel Tower Is Falling Down

When Babel Tower Is Falling Down is a domestic novel, from the author of the allegorical novels The Haunted Man (1997) and Upon This Bank and Shoal (2008), which makes us rethink about the beauty of natural human relationships, presently contaminated by the craze for individual freedom. We live in a world in which the voice of modern education has taught us to ignore the sanctity of social life in general and of conjugal life in particular, and compelled us to follow the animal instincts of mere survival. We failed to realize the significance of abstinence, self-control and sacrifice, misunderstood the blessings of rationality, considered sex as a mere biological need and sought the means of selfish opportunism to gain pleasure. We accepted our mental perversions as natural guidelines for a satisfied individual life; and forgot the value of disciplined freedom in the attainment of conjugal bliss and happiness.
The conjugal life of Rajesh and his paranoid wife, Geetha, is the pivot around which more than three hundred real or fictitious persons create a social milieu, portraying the agony and misery faced by modern families. If the Tower of Babel was an attempt made by man to reach heaven, the builders had to face physical, emotional and intellectual impediments. Here, the Tower of Babel stands as a symbol of human efforts to attain heavenly conjugal bliss, and Language as the divine gift given to prudent couples, at times, leading individuals to equivocation, to reciprocal understanding or misunderstanding.
We live in a world where every individual is aware of the limitations of language. We are confused and we misunderstand each other to 'the instability of language and undecidability of meaning.' We ignore the fact that our life and experiences are governed by certain ideologies which are built into our language and, thereby, language is no longer a reliable mode of communication. From the heart of every man and woman comes the deep sigh: "Oh, God! I'm helpless; I can't communicate with my spouse!" When the partners in family life fail to understand each other's language, this Babel Tower falls down! Through the nostalgic experiences of the narrator in between two flights from Ethiopia to India and back, the novel brings out certain tragic realities to remind the readers about the very delicate issues akin to successful family life. Alexander Raju's novel When Babel Tower Is Falling Down is a valuable contribution to Indian English Diasporic Literature.

About the Author:
Alexander Raju, an Indian English poet, novelist and short story writer has many books to his credit. Ripples and Pebbles (1989), Sprouts of Indignation (2003) and Magic Chasm (2007) are collections of his poems. His first novel The Haunted Man came out in 1996; its second edition in 2009. His second novel Upon This Bank and Shoal (2008) is published by CCB Publishing, British Columbia, Canada. Poles Apart on the Same Bed (2011) is a collection of his twenty-nine short stories. And Still Plays the Abyssinian Damsel on Her Dulcimer (2014) is a novel based on the history and legends of Ethiopia. The Voice of Ethiopia (2008) is an edited work and The Psycho-Social Interface in British Fiction (2000) is a critical work. 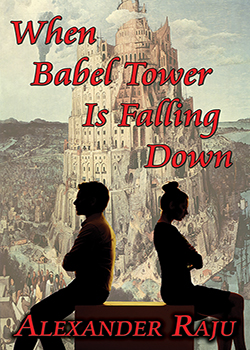 When Babel Tower Is Falling Down