When We Were Two

When We Were Two by Sommer Marsden

Since having their four children, Laurie and Steve have hardly had any time for themselves. When Laurie’s mother takes the kids away for four days, it offers Steve the chance to remind her of all the sexy things they used to do before the family came along, and enjoy the games only two can play.

Something Wicked This Way Comes by Jim Baker

Jane is convinced her sinister new neighbour, Seth, is obsessed with watching her. Her husband, Paul, refuses to take her seriously, until Jane’s behaviour inexplicably begins to change. Why is she suddenly so sexually insatiable, and just what does Seth really want from the couple?

Sorting through a trunk full of junk, Megan finds a pair of ruffled panties that once belonged to her bohemian Aunt Clarissa. Slipping them on, she is inspired by her aunt’s wild, sexually adventurous past, much to the delight of her boyfriend. And the only thing more exciting than putting the panties on is taking them off...

Sonja’s invitation to join him in the sauna prompts Erik to take along his new girlfriend, Tanya, for an afternoon’s fun. He hopes the uptight Tanya will relax in the company of uninhibited swinger Sonja, but even he couldn’t have predicted quite how well the two girls will get on as the temperature rises and the swimsuits come off. 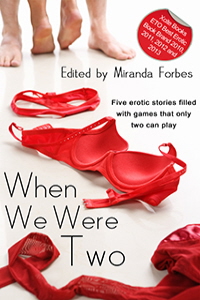 When We Were Two

I folded the throws scattered around the living room. I fluffed pillows, glanced back out the window, looked for something to keep me busy. With a house full of kids: fourteen, twelve, nine, and seven, it’s never hard to be busy. Now it was quiet. Silent. Eerie. I wanted to whip out my cell phone and call my mother. I wanted to demand my busy, chaotic house back.
Stephen read my face. He took my hands and kissed me. It took the edge off the anxiety but not entirely. “What do we do?” I asked. And sadly, it was a sincere question.
“Relax and enjoy it. I know it’s odd. It seems entirely new. Like we have never, ever been alone before,” he laughed. “But close your eyes and think way back. Way back when. Once upon a time, we were two. Not mom and dad. Steve and Laurie.”
I closed my eyes and found it hard to breathe. My ears kept straining for the sounds of siblings fighting or something being broken. The sounds of a shower running or a too loud stereo or someone on the phone demanding that the caller, “Shut up … Noooo … oh, shut up!”
“That was a really long time ago. I don’t think my memory goes back that far,” I laughed. But it was a nervous, high laugh. A dead giveaway that I was telling the truth. Spitting out a fact disguised as humour. “I can’t remember what it was like before they filled the house up with noise and kids and chaos.”
And it was true.
“I seem to recall that you liked this,” my husband said and dropped to his knees. His jeans made a whispery sound on the hardwood floor and he peeled my leggings down like he was unwrapping a present. My black Danskin leggings that were so much easier to put on than a fancy outfit. Even faster than jeans when it came to a hectic schedule.
Instinct took over. Anyone could walk in. I pressed my thighs together and twisted away from his face. Contorted in the opposite direction despite the fact that his face being near me, his breath on my plain cotton panties, made me wet between the legs. Made my heart speed up from something besides anxiety.
Steve put his hands on my hips. Hips that has supported four pregnancies and were definitely wider than when we started our marital adventure. “Shh now, Laurie. No one here but us. Now just let me. Come on, let me.”
I did. I let him peel down my panties in the bright sunny living room. Let him touch his tongue to my clit. I let him slide his fingers into me and probe against those sweet wet spots that made me clutch at his big shoulders. I let out a little cry as he slid his fingers free of me. When he latched his lips over my clit and started to lick more of those lazy circles, I felt tears leak from the corners of my eyes. It felt so good to let go. He felt good. I let my thighs fall open in invitation. He could finish that or he could slide into me. I was happy either way.
How quickly I had changed my mind. It was starting to come back to me in bits and pieces. Like a dream that you only recall hours later when you sit quietly with a cup of coffee.
“Not yet,” he said and continued his languid tour of my cunt. “We used to take our time. Remember?”
“Not always.” More of it came flooding back to me. The time when we were two. Sometimes we were hurried. In a frenzy of clothes and hormones and I could barely breathe until he slipped his cock inside of me and fucked me. “Sometimes we were like crazed animals,” I laughed. This laugh was lower. More sultry. Not nervous at all.
Stephen kissed the jut of my hip bones and the swell of my belly. Little silver stretch marks tattooed that skin. I hated them for the most part, but when he kissed them they seemed important. Meaningful. He drew his tongue over the surge of flesh that were my hips, the little landslide of freckles that I loathed and he loved. He kissed my ribcage below my breasts. He did all of this slowly. As if we had all the time in the world. And we did, or so it seemed.
His tongue wrapped the very tip of my nipple and an invisible cord of pleasure inside of me was tugged. I felt the warm sensation of want shoot from my nipple to my pussy. I spread my legs wide and wormed my hand between us to find his erection. He skittered away from me, “Not yet, not yet,” he scolded.
“You are stubborn.”
“I am remembering. I am recapturing the time long ago. Now we constantly wait for the knock on the door or the sick kid or the fight that interrupts. Or we have to wait until the middle of the night and then we’re both tired. This is nice right now. This is what it used to be for us. This is what we are going to make it again. Starting now. A new leaf.”
His mouth came down on me again. Hot and wet and very welcome. I arched back, into his embrace. Calming myself. There was time to be frenzied later. Four days. Four days of … whatever we wanted.