Lillian feels the magic around her. She even sensed when two men came through to the human world. One man believes Lillian’s death is the only way to save the world. The other only wants to love her, even if her life forever changes existence. 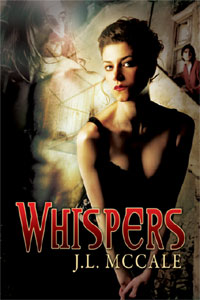 Magic tended to come through the world softly, like a whisper. Most people were incapable of hearing it. Not so with Lillian. She heard it very clearly. The soft sound swept over her, even in the rainstorm that now soaked her clothes and left her hair plastered to her head. Standing in the maelstrom, she didn’t move, only let the whisper come over her. It tickled slightly, words, images mingling around her body. It was more than sound, more than thought. It was a whisper left on the skin, with breath warm, soft and light.

She closed her eyes and listened harder. A door opened somewhere in the atmosphere. She felt the power switch between the worlds and she knew where the magic had sprouted. With her own focus, she sought a clearer image of who’d breached the passage between worlds. She saw no face, but a message was clear.