Wishing For A Highlander

While examining Andrew Carnegie’s lucky rosewood box, single-and-pregnant museum worker Melanie makes a tongue in cheek wish on the artifact–for a Highland warrior to help her forget about her cheating ex. Suddenly transported to the middle of a clan skirmish in sixteenth-century Scotland, she realizes she should have been a tad more specific.

Darcy, laird in waiting, should be the most eligible bachelor in Ackergill, but a cruel prank played on him in his teenage years has led him to believe he is too large under his kilt to ever join with a woman. He has committed himself to a life of bachelorhood, running his deceased father’s windmills and keeping up the family manor house…alone.

Darcy’s uncle, Laird Steafan welcomes the strangely dressed woman into his clan, immediately marrying her to Darcy in hopes of an heir. But when Steafan learns of her magic box and brands her a witch, Darcy must do what any good husband would–protect his wife, even if it means forsaking his clan.

WARNING: A pregnant museum worker, a sixteenth-century Scot, and a meddlesome wishing box. 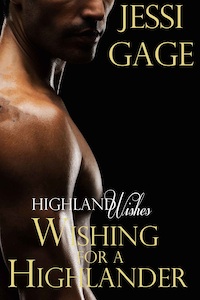 Wishing For A Highlander

She gave Darcy The Look, the one that let a person know he was one step away from meeting with serious harm. She’d been wrong; this wasn’t a nightmare. This was hell. Fear and betrayal iced down her spine. Darcy’s hands, which had infused her with comfort earlier, now made her feel trapped. She wrenched her arm out of his grasp and backed away, scooting behind Steafan’s desk to put the enormous thing between her and the two treacherous Highlanders.

“I see ye’ve told her what it means for a Keith to claim a woman,” he said to Darcy. Looking at her across the desk, he said, “Dinna be hard on the lad. If he hadna done it, I would have, and me with three daughters for you to become second mother to. I would ha’ been good to ye, lass, but Darcy, he will worship you.” He winked at Darcy, then spread out some papers and reached for the black-feathered quill. “I have the contract ready, Steafan. Begin when ye wish.”

Steafan smirked at her. “What’ll it be, lass, the stocks tonight, or a wedding?”

“The stocks,” she said without hesitation, relieved she seemed to have some choice in the matter.

Darcy surged around the desk and shook her by the shoulders. “Dinna do this,” he said close by her ear, his voice urgent and low, private from all but perhaps Aodhan, who stood near the desk. “A person in the stocks must be stripped to their skin and placed in the courtyard for the entire clan to laugh at and spit on. I’d sooner defy my uncle and be banished from Ackergill than see ye dishonored so. Dinna make me do that, I beg you.”

Fear kicked her heart into her throat at his manhandling. But as his words penetrated, she stopped fighting his hold. He was serious. He’d abandon his home, his mill, Edmund and Fran, everything he had. To keep her from a night’s humiliation.

He might be a manipulative, lying brute, but he seemed to care for her on some level. She looked hard in his eyes and saw vulnerability glowing behind a glaze of very real fear. Fear for her and for what her actions might cause him to suffer.

She shoved away the sympathy he didn’t deserve. He projected an air of absolute honor, but honorable men didn’t trick women into marrying them. “You lied to me,” she seethed. “You told me you’d help me get home.”

“And I will,” he said. “Do ye nay remember what I told you before Steafan came in?”

She remembered the words verbatim. “Whatever happens tonight, Malina, ye need no’ fash that I’ll keep my word to you.”

Malina. The mere memory of her name spoken that way softened her, damn her romantic heart.

She glanced around the office to see Aodhan nodding his encouragement. Steafan watched them with an amused tilt to his mouth and a triumphant lift of one eyebrow. Hamish stood at the ready, his hands curled into cruel claws that she had no doubt would make quick work of stripping her and binding her in stocks. Stocks, for heaven’s sake! Did she really want to be subjected to that when the alternative was marrying a gorgeous Highlander who would keep her safe until she could figure out how to get home?

“Fine. I’ll marry you tonight. Congratulations on being slightly more attractive to a woman than the stocks.”