Would You Like Fries with That? by Sommer Marsden

Her friend Charlene loves the traditional man in uniform, the hard and fast action men fighting battles or enforcing the law. But Jamie has quite a different taste; she likes her men in uniform to come with fries and a shake on the side. Todd isn’t like any of her other fast-food lovers though; could this one be for keeps?

The Arresting Officer by Justine Elyot

Imogen sets out to save the ancient tree from the bulldozers, but ends up being saved herself by high-school flame Jason Sargent, who now happens to be a sergeant. The pair has some unfinished business and neither can think of a better place to clear things up than the police station interview room. Jason’s interrogation techniques have Imogen revealing all in no time ...

She’s served her time for her crime and her release date is imminent, but today she’s after a whole other kind of release. Prison-guard Colt has seen her through her sentence, from the highs to the lows, as they have played out their own kinky rehabilitation programme. For most, solitary confinement is the ultimate punishment, but for her it’s the ultimate pleasure.

End of the Line by Heidi Champa

Moving from the country to the city can be a daunting life change, but the city has its share of attractions to ease the transition. For her, it’s tantalising tram-driver Stella. The municipal grey uniform might be uninspiring but Stella manages to make even that dull outfit play a part in her sexual fantasies. Now it’s the last tram of the night, and she is the last passenger, there’s no better time to turn her fantasies into reality.

It’s been years since she last saw Andre who left to serve as a UN peacekeeper, and though she’s now a married woman, she can’t resist meeting him at one of their old haunts for the Christmas market. It isn’t long before the mulled wine and the fairytale forest are forgotten though as these two destined lovers rediscover their timeless passion. 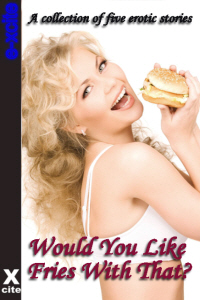 Todd. His name is Todd and he is fabulous. White teeth and red lips. Blue eyes and smooth skin. He must not work the fryer. There isn’t a single blemish on his beautiful face. ‘Yes, I would like ...’ Well hell. What would I like? I have no idea. ‘An ... um, chicken sandwich, no condiments. A diet cola and ...’ His lips are distracting me and I swallow hard. I can feel the annoyance radiating off the person behind me.
‘Ma’am,’ he says, exhausted already despite his young age. ‘Would you like fries with that?’
‘Um ... are they good?’
‘For crying out loud!’ The woman behind me barks and I turn to her, narrow my eyes.
‘Oh, I’m sorry,’ I say. ‘I was under the impression that it was my turn.’
She is frazzled, obese and has three kids in tow. I turn around quickly because I get the feeling she might want to do me bodily harm.
Todd leans in and my pussy twitches at that. Already under my pretty crème-coloured tights, my satin panties are wet in the crotch. My nerves are all jaunty and my skin is buzzing with anxiety and excitement. ‘Miss, you really have to order. People tend to get a bit aggressive during the lunch rush,’ he says.
‘Oh, of course. I would. I would like fries with that.’
Todd nods and smiles. The smile goes straight to my cunt and then swiftly burns a trail from pelvis to nipples. I smile back. When I pay Todd, I slip him the note I brought with me. It’s simple, really.
MEET ME IN THE PLAY COURT AT FIVE. I WANT YOU. WEAR YOUR UNIFORM. XOXO J
No phone number. Not even my whole name – Jamie – just orders to meet me if he wants to fuck. It’s as simple as burgers, fries and shakes. I walk to the condiment counter and watch him open it. His eyes look up, he searches, finds me. Nod. He smiles again and it is all I can do to eat my chicken sandwich and hurry back to work. I lock myself in the small blue powder room, plant my boot on the toilet lid and push my hand into my panties.