You’re Gonna Make It After All - The Life, Times and Influence of Mary Tyler Moore

Mary Tyler Moore was a legendary television and film performer who was much loved and lauded by millions as the personification of sweetness and innocence filtered through a sanitized television world. But as fate would have it, Moore was so much more than that. Coming of age at a time when feminism and women’s rights were on the march across the land, Moore’s roles in The Mary Tyler Moore Show and The Dick Van Dyke Show proved a flashpoint and a flag bearing influence to countless women who had decided in Mary Richards there was the possibility of so much more.

In You’re Gonna Make It After All: The Life, Times and Influence of Mary Tyler Moore (Riverdale Avenue Books), New York Times Bestselling Author Marc Shapiro digs deep into her much-celebrated and often turbulent life as filtered through the coming of age of women’s rights led by such luminaries as Gloria Steinem and Betty Friedan and their triumphs and historical breakthroughs which were often influenced by Moore and her culturally important sitcoms. How the actress reacted to being cast as a feminist icon, her often contrary issues with the women’s movement, how her greatest television hits often brought home important liberal points in a stealth manner and her own political and social values form the backbone of a sociological, political and, yes, traditional celebrity biography that tells more than one expected from a book on somebody the world knows so well.

In this thoroughly researched and documented biography, readers will discover…

The truth behind the alleged relationship between Mary Tyler Moore and Elvis Presley.

How Moore got her revenge on a neighbor who molested her at age six.

“Mary Tyler Moore was an important entertainment personality,” author Shapiro states. “But she was also so much deeper than that. Her life and times are already well known. I felt that putting this reluctant feminist in the ring with the coming of equal rights for women would give the picture a different and ultimately insightful twist.” 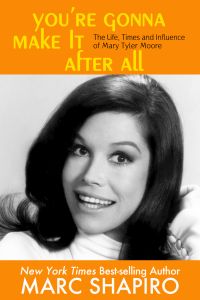 You’re Gonna Make It After All - The Life, Times and Influence of Mary Tyler Moore

Gillen came up with the ideal nod to Moore and the show, an eight foot tall bronze of an exuberant Mary Richards tossing her trademark Tam O' Shatner hat in the air. The sculptor, not surprisingly a committed fan of Moore and the show, saw the importance of presenting both joy and determination in the piece.

"She [Moore] helped break the stereotype of womanhood that our generation grew up believing was our destiny. She was the light breeze that blew through our minds and left us with the feeling that we could do anything we wanted to."

On May 8, 2002, the statue was unveiled on a 43-degree morning in front of an enthusiastic crowd of approximately 3000. Playing in the background during the unveiling was a live rendition of the song 'Love Is All Around'. But what would ultimately make the moment was that Moore had come to the ceremony to offer support and to help foster the spirit of nostalgia and goodwill in the moment.

Moore delighted the crowd with her humor and good cheer, eliciting waves of laughter when she recited some of her classic television lines like 'Ooohh Rob!' and 'Mr. Grant!' in that trademark little girl trembling tone.

When pressed over the years, Moore would concede that there was a sense of taking what she had done and passing it on to coming generations. There was a real sense of her place in time and what she would ultimately pass along. Moore said as much when she was present at the unveiling of her likeness at the 2002 presentation of her statue in Minneapolis.

"I hope when a little girl walks by the statue, she will ask her mother who that was and that it will be explained to her that she was a young woman who had a dream and followed it through."