You Must Remember This - A Gay Retelling of Casablanca

You Must Remember This is an homage to the classic film Casablanca on the 75th anniversary of the film’s release in America.

It is the height of World War II. Frank Chandler is an American GI who has been separated from the army on a “blue discharge.” Along with his musician friend and sometime lover Dan Jackson, he finds himself in Marrakesh (only a short distance away from Casablanca), an international city where every kind of pleasure is easily available.

But Marrakesh is also a city of danger. The Nazis are establishing themselves there, and their ominous presence means life is fraught with peril.

Then Lilli, a beautiful, mysterious woman from Frank’s past, shows up unexpectedly, and he finds himself confronted with the hardest choice of his life. Lilli’s presence stirs emotions he thought he had buried. Yet there is still the city—and its men—and the thousand pleasures it offers…

Should Frank go with Lilli and try to make a “normal” life with her? Or should he follow what he increasingly believes to be his true nature? That is the dramatic conflict at the heart of You Must Remember This. 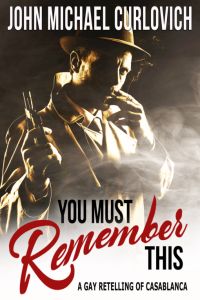 You Must Remember This - A Gay Retelling of Casablanca

Its remoteness made Marrakesh a town without many enforceable standards or morals. Sexual ambiguity was a given there. Substances frowned upon in more “civilized” places were easily available. A lively black market in stolen goods and contraband fed the economy. And so “questionable” types from across the globe made their way there.

Their numbers were swelled by refugees and political outcasts hoping, mostly in vain, to book passage on the London flights. The wealthier and smarter among them managed to do just that. The rest remained in Marrakesh, waiting and hoping, hoping and waiting.

It was only a matter of time before the Germans noticed the city.

Who could have guessed that for me it would turn into a city of passion and romance?