You Were the Moon

Mitzi Weinhaus is the talentless daughter of two Munich Kabarett stars. One night, in an underground club that has so far escaped Nazi detection, she meets the enigmatic singer Giselle, who offers her the chance to be a hero. Teamed up with the mysterious Wolfrik, for whom she develops an alarming attraction, Mitzi soon finds herself ensnared in a world of secret societies, super-soldiers, monsters, and gods. With double-crosses on all sides, can she save her parents from certain death—and her heart from one of the most powerful beings in the universe? 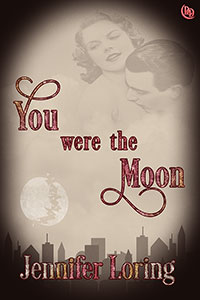 You Were the Moon

Cigarette butts broke apart beneath Mitzi’s shoes. Crumpled playbills and matchbooks drowned in a waterlogged pothole filled with neon pink light; a tattered, faded poster on the opposite wall advertised an art opening long past. Pasted on nearly every surface were the inescapable propaganda posters in shades of cream and bloody red: “For Freedom and Life—People’s Storm!” “Only Hitler!” “The Eternal Jew!” Vapid heroes smiling at the sky, or Juden with huge crooked noses and gold coins in their hands. Reminders that his eyes were everywhere, each citizen a potential threat to her life.

Propellers humming softly, an airship swept its spotlight back and forth through a sky polluted with pastel light from sharp-angled skyscrapers. Giant speakers mounted on rooftops and aimed at the streets warned crowds of the punishing sonic blast resultant in the event of protest. Out well past curfew, Mitzi ducked into the shadows of the recessed doorway and flattened herself against the wall until the ship passed. Deutsche ingenuity had unleashed U-boats, submachine guns, and flamethrowers upon the Allies during the Great War, but it hadn’t been enough for victory. Deutschland’s engineers did not intend to repeat their mistake.

Mitzi stared at the dull metal doors fastened onto a windowless, nondescript building. She wasn’t safe out here, just another Jude to be harassed and beaten. It was not difficult to sense the end of things, now that the little troll of a man had become Chancellor. Most artists had already fled for Switzerland and France. The SS had raided and shut down all the clubs in a single night.

The Kabarett had been to Mitzi like water, like air, some essential thing without which she could not live. For years she sat by the stage amongst the city’s greatest writers and artists, watching puppet shows and women who danced half-naked, and actors performing the latest work of their playwright friends. She’d watched her mother and father, now away on another of their Continental tours from which this time they would be wise not to return. They hadn’t even told her of their departure; she had gone to the house one afternoon to find it locked. Ringing the switchboard amounted to nothing. Perhaps they’d tired of taking her along and explaining to others their daughter’s unfathomable lack of creativity.

The clubs were all gone now. All but, inexplicably, this one. And here she stood, alone, with the thrum of her pulse in her ears. Waiting, though she knew not for what.

This was Das Blut der Unschuldige, according to a title hand-painted in dull red letters over the door, a scant confirmation of its existence. Mitzi did not remember where she had first heard The Blood of the Innocent whispered amongst her friends like a terrible secret. Perhaps that was how the SS, despite all their toys, had managed to overlook this drab and unremarkable building. It appeared abandoned, its windows papered over, its walls peeling. Someone might have painted the name here to throw the SS off the trail.

She pulled the handle. Unlocked.

Mitzi stepped into a dim foyer empty save for two elevators. She strained to hear the hum of their motors, an indication of life in the building, but they were silent. There was sound, however, music and applause and laughter drifting from somewhere beneath her feet. A metal door with Exit painted in red above it stood at the end of a short corridor beyond the elevators. Mitzi pushed it open. The sounds grew louder, emanating from whatever lay at the bottom of the staircase.

What did she have to lose? She followed them down.

To her left stood a metallic ticket booth of aerodynamic lines and curves and in it a man who, despite the gloom, wore dark glasses. “Zwei Reichsmark.” His face was smooth, emotionless, and a red halo of light from the exit sign glinted off his bald head. Mitzi wondered if they’d installed an automaton. She dug into her purse for a silver 2 Reichsmark coin and pushed it into the slot at the bottom of the window. A gray paper ticket emerged from the same space.

“Enjoy the show,” he intoned, as if he had not enjoyed one in a long time, or ever. Mitzi took her ticket and walked through the club, past chairs upholstered in the same sumptuous crimson velvet as the curtain draped across the stage. The exterior had been a ploy after all, for the well-appointed club teetered on the edge of ostentatious.

A gilded cage hung suspended in each of the four corners of the room. Young men and women clad in sparkling gems and little else, their skin shining and opalescent, writhed about in dances so lascivious that propriety forced Mitzi to avert her eyes. Yet a little thrill raced through her when she found the courage to peek again as hips thrust toward her or a jeweled breast swayed with an arm’s movement. She chided herself for the heat creeping up her neck and into her cheeks. She’d seen less clothing at other Kabarett clubs in the city. No, it wasn’t their nudity that caused her to blush, but the blatant and unrepentant sensuality of their dance, spoken directly to her virgin heart’s secret desires.

The club’s patrons, she was surprised to note, comprised the upper echelons of München society: businessmen in suits and hats, discussing deals with clients; women with fur-lined shoulders and silk gloves, sipping elegant pink cocktails. Ice clinked against glass, and laughter bubbled forth from painted lips. They belonged here. Mitzi found a table at one corner of the stage, which extended into the audience on three sides, just as the jazz band above her finished its set.

“And now,” said the emcee, “she who needs no introduction. Ladies and gentlemen, I give you the one and only, Giselle!”