Sana's victims are usually corrupt. Until Joshua, the one innocent victim she can't forget. Her focus and job suffer. When her boss summons her down to Hell in order to explain herself, she has to figure out a way to dodge punishment, and rid herself of Joshua's influence. 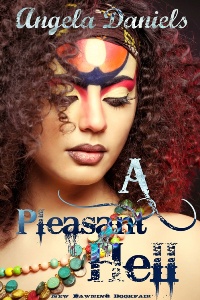 This was definitely not good. Though technically in charge of what happened Earth-side, he usually allowed them to deal with the big boss and their own assignments without micro managing. Normally, he didn't check up on them. How did he find out that it had gone wrong?

"Ishmel. Why are you up so late?" She leered and sauntered toward him. "You're not waiting up for me, are you? I'm flattered, but our charms really are wasted on one another."

His expression didn't change. "You let a soul escape."

"So what? He's a done deal. He'll be ours sooner or later." She crossed her arms. The sinner was a guaranteed future citizen of hell, but her real crime was failure.

"Yes. However, you lost the opportunity to claim the credit for his damnation. You know the pressure we're under to make quota."

She rolled her eyes. Management concerns bored her. "Hey, I'm great at my job! This is the first target I've lost, so why you gotta jump all over my ass?"

His lips twitched, but he didn't smile. So serious. Shit.

"Rumyal ordered me to personally make sure you go down and see him as soon as you got in."

His urgency and grim demeanor freaked her out.

She scowled. "How much trouble am I in? Is this a one-way trip? Doesn't bagging that do-gooder cut me some slack?"

He sighed and came to stand in front of her.

"That was fantastic work. You're my best soul sucker. I won't let you go without a fight."

He shrugged. "But achieving that, then screwing up a simple acquisition is unacceptable.

Something up you want to tell me about?"

She clamped her lips shut, and shook her head. No way was she going to admit the truth.

He waited, a frown on his unlined face. When she said no more, his frown deepened. "Fine. Then you have to take your licks."

"I'll see you tomorrow night," he reassured her. "Come on." He escorted her to her pen.

With a huff, she shed her clothes. No use ruining them. She pressed her thumb into the identification pad and waited until the top slid back, then curled down into the three by four by three box. Normally it gave her a sense of comfort to be enclosed for the coming day, but she wouldn't be roosting here long.

Ishmel wished her good day as the top slid up. As soon as it locked down, the triangular screen above her illuminated.

A crooked-toothed imp grinned. “Boss wants you down here.”

"I know, dammit." She punched the inside of her domicile. The imp technician's high-pitched chuckle made her grind her teeth. Bad enough Rumyal wanted to bitch at her in person. To be subjected to this little bastard's taunting was humiliating.

It pressed some buttons off screen, and the whorl of her portal vibrated through the pen. She popped into Hell.