A Visit to Aunt Rita’s: A Rework of an Original Female/Male Spanking Comic First Produced by Nu-West/Leda in the 1980’s

by The Poser Artist, Ed Lee

Rita McLennon is a successful fashion industry executive cut from the same mold as Miranda Priestly (played by Meryl Streep) in “The Devil Wears Prada”, whose domineering ways have left her unmarried. She represses the volatile mixture of emotions created when her sexual frustration is combined with a responsibility to discipline her nephew John. Getting John out of a scrape with the law however, provides the lead up to her introduction to a similar group of women - who have discovered how powerful an outlet dominating a man can be.

About the Authors:
When it comes to the portrayal of erotic spanking, Ed Lee was the original trailblazer through his company Nu-West/Leda. Nu-West is the oldest and largest producer of spanking and corporal punishment related videos in the world. The company began in 1978 by selling photo sets and 8MM movies. Four years later they produced their first video, and now have over a thousand titles.
No matter what your taste in discipline that involves a female, whether it is female submissive, female dominant, spanking, caning, strapping or whipping, you will find something that interests you in their huge collection of videos. Checkout their large selection of free video previews at: www.nu-westleda.com

The Poser Artist is a relatively new author, who creates fantasy artwork and stories featuring traditional (M/F, F/M, F/F) corporal punishment carried out in authoritarian settings (prison, school, domestic) - where the characters act thinly oblivious to the inherent sexuality of administering discipline to a well shaped, submissively posed backside. For plausibility, the stories are set in time periods or places where such practices were (or are) a very much justified, accepted, and even encouraged norm - creating a “romance novel” effect with artwork that’s neither too heavy (into the BDSM scene) nor too light (at the unicorns and roses end of the scale). More of The Poser Artist’s work can be viewed at: www.posercpart.com 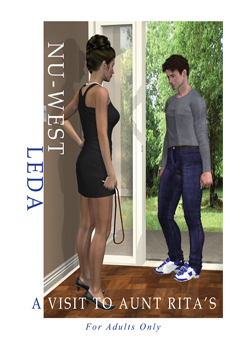 A Visit to Aunt Rita’s: A Rework of an Original Female/Male Spanking Comic First Produced by Nu-West/Leda in the 1980’s

by The Poser Artist, Ed Lee

Locked In (MMF)
Elizabeth Raines
In Shelf
$1.99
Tweets by
sirenbookstrand