The Gospel of Love 1

Luke Finley, the eldest of four brothers, is a committed serial monogamist. He's all for one woman at a time, but not one woman forever. He knows a lifetime of fidelity just isn't in his genes.

But when his latest girlfriend kicks him out--of his condo--the woman he's always thought of as "one of the guys" turns out to be the one woman who can rock his world and make him believe in forever. 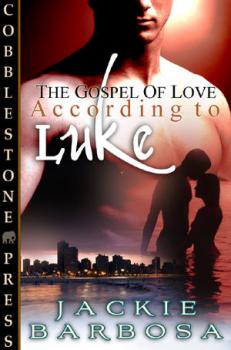 The Gospel of Love 1

More From The Gospel of Love

According to Luke
Jackie Barbosa
In Shelf
$4.99 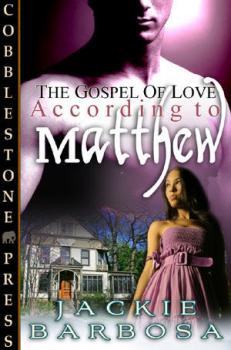 According to Matthew
Jackie Barbosa
In Shelf
$4.99 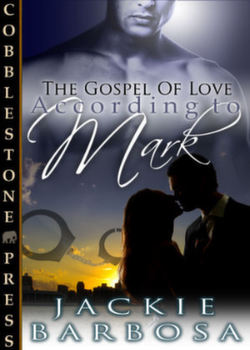 “So she said, ‘You’re never going to marry me, are you?’ and I just stared at her, because I told her when she moved in I wasn’t the marrying type. And then she threw me out.”

My younger brother, Mark, gave me a slack-jawed look of bafflement. “It’s your condo.”

I shrugged and took another pull from my pint. “I didn’t want to deny Elaine the satisfaction of tossing me out on my ear. I’ll stay in a hotel for a couple of days until she can clear out.”

My other brother, Matthew, shook his head. “I don’t get it. Why do women think they can get you to marry them if they move in with you?” Matthew had just been through his own breakup, and it hadn’t been pretty.

“Because men want them to think it.” This observation came from Lisa Sullivan, my youngest brother, John’s, best friend. Best friend, not girlfriend. She and John were tight as Speedos, but he didn’t swing that way.

When I first met Lisa, I thought she might play for the other team, too, but over the years she’d had enough boyfriends to convince me she wasn’t a lesbian. Which was sort of too bad, because up until I was sure, I’d done a fair amount of fantasizing about her in bed with other women. She wasn’t to my taste in women, which ran to tall, dark-haired beauties with big, brown eyes and bigger tits. By contrast, Lisa was a cute blonde, green-eyed pixie with sharp elfin features and a wit to match. Envisioning in her in bed with other girls made me horny as hell.

Although our Thursday night get-togethers at O’Malley’s had started as a brother-bonding thing, Lisa had become a regular somewhere along the way. Possibly because she seemed to know what was going on in other women’s heads and could explain it to us in terms we understood.

“No, we don’t.” Mark set his whiskey glass on the table with a thud. “If we want to marry you, we’ll ask you to marry us, not move in.”

John laughed. “Any woman who’d be willing to marry one of you, let alone all three of you, needs her head examined.”

Mark shot him a dirty look. “That’s not what I meant, and you know it.”

Lisa winked at John then smiled apologetically at Mark. “I know that, and you know that, but most women don’t think that way. They think if you ask them to live with you, you must be getting serious. That you’re starting to feel you can’t live without them. And once they move in, they figure they’ll be able to show you how completely indispensable they are to you.”

“Which is exactly why I never let Casey move in,” Matthew muttered into his Harp.

Damn, he was turning morose again. It had been two months since his girlfriend turned down his marriage proposal—complete with diamond ring, fancy restaurant, and bended knee—and I’d thought he’d be over it by now. Obviously, he wasn’t.

By contrast, I was already over Elaine. Had been for some time, to be honest. We’d lived together as virtual strangers for months, sharing a bed, a closet, a refrigerator, and little else. Which was all the more reason her decision to toss me out on my ear because I wouldn’t marry her had come as such a shock.

I call it the Luke Finley two-and-a-half-year itch. Although, with Elaine, it seemed to have come about six months early.

Lisa was right about one thing, though: women thought the whole point of living together was to convince men to marry them. It wasn’t an end, but a means to an end.

Maybe I should take a page from my little brother and revert to having my women maintain their own apartments. Not that it had worked for him. But then, I didn’t want to get married. I wanted companionship and a reliable lay, not a soul mate. At thirty-eight, I was well into confirmed bachelorhood, a serial monogamist with no intention of converting to the real thing. And with my demanding job, the last thing I needed was a wife, a picket fence, and a dog, to say nothing of babies.

With Matthew well down the road to another round of depressing reminiscences about his failed relationship, I decided it was time to get the hell out of Dodge. I polished off my Guinness and excused myself. I had to get myself a hotel room, after all. The Hilton around the corner from my office probably had plenty of space, but no sense taking chances.

As I walked out of the pub and into the parking lot, a cold blast of air greeted me, and I remembered I’d left my jacket on the coat rack inside. I turned around to go back inside to retrieve it and came nose to nose—or more accurately, neck to nose—with Lisa.

“Hey,” I said, a little startled by her sudden appearance.

I thought she was on her way to her own car, but she didn’t move on. Instead, she looked up at me, her wide green eyes sparkling with amusement and…something else. Something that made my balls tighten and my cock twitch. Which was odd, because I’d never thought of shagging Lisa myself. Not until this moment, anyway. Now, it was all I could think about.

“I came out here because I had to tell you something.”

She put her hand on my upper arm, and my muscles tensed beneath her touch. I wanted to cup her cute little ass in my palms—yeah, I’d noticed it was cute—drag her to my chest, and kiss her. And then take her back to my hotel room and…

“I don’t think you’re not the marrying type, Luke. I think you choose women who aren’t the type you’ll marry.”

I was halfway to making my move when her words stopped me cold. “What the hell is that supposed to mean?”

It wasn’t like Lisa to be cryptic. She said what she meant straight out, no beating around the bush, which was the main reason she’d infiltrated our little band of brothers. The way she thought, the way she spoke, she was more like a guy than a lot of men I knew.

At the moment, though, she didn’t seem like one of the guys. She seemed every inch a woman. A woman whose pants I suddenly and unexpectedly wanted to get into. Even though—or perhaps because—she was behaving just like a woman and making no sense at all.

She sighed, an impatient gust of breath. “You sleep with women who meet some physical ideal you have in your head without for a moment thinking whether you actually like them or not.”

Okay, now she really was sounding like a woman. “Of course, I sleep with women I find physically attractive. In case you hadn’t noticed, that’s kind of a prerequisite if you’re a guy.”

She crossed her arms over her breasts, thrusting them upward beneath the fabric of her low cut, cashmere sweater. Damn, she had cleavage. How had I failed to notice that before? My dick strained uncomfortably against my Jockeys. I should’ve worn boxers.

“And they want you for the same reason,” she went on, not acknowledging my point. “You’re handsome, you’re rich. You fit their ideal picture of a husband, but they don’t care about you. And you know it, deep down, which is why you won’t marry them.”

“Oh, great.” I snorted. “Now you’re going to tell me I should be looking for my soul mate or some such crap.”

“Well, if you want to keep spending the night in hotels every few years when your girlfriends realize you’re not going to come up to bat, that’s your business. I just observe that most people want to be wanted for more than who they are on the outside.” She shrugged and turned to go back into the pub.

I grabbed her arm to stop her, pure reflex. Her eyes widened, giving her the startled appearance of a woodland nymph caught naked in her bath by a mortal. As soon as I had the thought, I wanted to laugh at myself. My college mythology professor would be pleased to know her course hadn’t been totally wasted on me.

“What are you suggesting, then?” I asked.

She shivered, but I knew it wasn’t because she was cold. The heat sizzling between us as we stood on the sidewalk in the cold, winter air could have melted a snowbank. Probably would have if it hadn’t been the driest winter on record.

“I’m not suggesting anything. I’m just saying—” She licked her lips with the sexiest pink tongue I’d ever seen. I could think of quite a few better uses for it.

“Who are you suggesting?” I amended, rubbing my thumb over her upper arm in a small, circular motion.

Her eyelashes flew up then fluttered down. “Me,” she whispered. “I’m suggesting me.”