All Right On The Night

All Right On The Night by Jo Nation

Every Wednesday Fenella travels on the Number 42 bus to clean George Hawker's apartment, which is contained within a brand new, sparkling edifice called The Foundry. George is always out at work when Fenella calls, so she has plenty of opportunity to explore the apartment on her own. She isn't really a nosy person, but she can't help wondering what sort of a man George is. There are few clues to indicate any kind of a personal life, no family photographs, no evidence of a social life of any kind either.

George's bathroom is a temptation; as befits such a modern minimalist apartment this is more wet room than traditional haven of relaxation, but for a few minutes Fenella forgets her duties. The decision to drop her guard will prove a fateful one; in a short space of time she will understand both the nature of George's identity and the meaning of pain.

Would you dare to attend a school reunion? It can be a daunting experience, walking into a room full of people who have their own agenda, whether they're the good girl, the bad boy or the bully. So many stories, so many reasons for being there.

Sarah is in two minds about the reunion; should she stay at home and play it safe or be bold, take a chance and run the risk of feeling let down?

Sometimes fate smiles on you and courage is rewarded. Sarah's decision takes her a million miles from her comfortable – and ever so slightly boring – life, luring her into a world where she chooses to put her fate in the hands of a mistress of discipline.

Web of Desire by Emily Dubberley

An arrogant movie producer thinks that his life is completely under control and, with money, power and young actresses queuing up to lie on his casting couch, most of his colleagues would agree with him. Yet, as the saying goes, pride comes before a fall.

When he meets a mysterious woman with a heavenly name and an equally heavenly body he is immediately attracted to her because of, rather than despite, her dominant nature. Yet he soon discovers that his Angel has a devilish nature - and a desire to be in charge.

In the ensuing battle of wills between alpha male and female there can only be one winner. Whoever eventually emerges as the dominant force can claim to be a true expert in the art of pain.

The Silken Web by Virginia Beech

Clarence has a taste for the finer things in life but, as a humble valet to the beautiful but formidable Lady Jessica Cleveland, he has had to learn to hide his interest in her fine underwear. Already he has been dismissed from his former post with another noble family because of an unfortunate incident with a pair of sillken knickers, yet Clarence still struggles to control his base instincts when faced with such finery.

One afternoon Lady Jessica returns unexpectedly to find Clarence in a compromising position with one of her best silk stockings. Lady Jessica knows that she has to act immediately to discipline such bad behaviour. However, fortunately for Clarence, Lady Jessica is determined not to dismiss him.

Well, with Lord Cleveland being such a disappointment in the bedroom, a lady must find her entertainment where she can!

Waiting for a Spanking by Shanna Germain

There's one thing about marrying a man with big hands; you can't help wondering what they'd feel like if put to good use.

Subtlety rarely works; leaving copies of The Compleat Spanker lying around, dropping vague hints. No, only the direct approach really gets results. Assume the position and wait, even if your muscles start to scream because you know that the pain is all part of the pleasure and there are few pleasures more satisfying than discovering that your husband has hidden talents...

These stories have also been published in Ultimate Submission ISBN 9781905170968 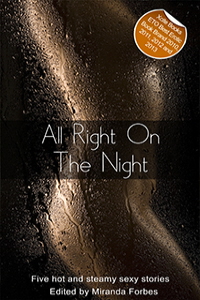 All Right On The Night

The frustration of her search evaporates as wide-eyed she explores shelves and clothes racks so suddenly revealed within the small room.
How come the closet is unlocked today?
There are leather suits in women’s styles, lingerie, DVDs, explicit books and, hooked over a rail, a collection of canes of varying size, schoolmaster’s canes with curled handles. There are pairs of fine leather gloves, masks, belts, ropes and a tawse, its split leather ends cut into many tails. George’s secrets are there to behold. Fenella thumbs the pages of a slim volume, a tale of a Victorian chambermaid stealing her Ladyship’s jewellery forced to take stern consequence from his Lordship. Tinted line drawings show the maid’s glowing buttocks, but the smile of her full-lipped glance, and the look of pleasure on the Lord’s face with his breeches round his knees, indicates the punishment is not quite what her Ladyship intended.
The closet’s secrets champion deep stirrings; Fenella needs to share its excitement imagining George tall, dark and commanding standing in front of her, his eyes scanning her willing body submitting to his punishment. But why the neatly folded lingerie on the shelves, the female-wear hanging on the rails? Would she be dressed in this finery to kneel as supplicant before George? Could she lure Julian to Apartment C2 to share the bounty she had found?

A window from floor to ceiling in the en-suite wet room with thin curtains draped across looks out over the garden; Fenella pulls them back, opening the window; she wants no barrier between her showering nakedness and the outside world. Her body responds to her daring, her flesh tingles priming her nipples to stand hard and proud. She shuts her eyes wanting to be seen her glistening body lit by ceiling spotlights, wanting a stranger, the young man working in the gardens to watch from his distance, wanting to take her.
‘What the hell is going on here?’
Fenella gulps a mouthful of foaming water and gags; she stares wet-eyed at the tall figure in the doorway of the master bedroom.
‘Well?’
‘What are you doing in here?’ Fenella’s voice cracks. She tries to clear her throat, excitement tingling deep within as the intruder’s eyes explore her exposed flesh dripping in the shower.
‘Never mind me. What are you doing in the shower?’
‘This is Mr George Hawker’s apartment, and I work here.’
‘I see. Perhaps you won’t work here much longer. Let me introduce myself. I’m Georgina Hawker. My friends call me George.’
How has she never realised Apartment C2 isn’t a man’s lair? The tall woman is wearing a black suit of a finely cut three quarter length jacket, tailored trousers to her calf and exquisite wedged sandals laced to her ankles with red bindings and hints of crimson nail varnish.

The Race (MMM)
Cinzia Maro
In Shelf
$4.99
Tweets by
sirenbookstrand