From a World War II time travel to Scotland's bonny shoresto modern day women who find themselves in dangerous situationsmake yourself comfortable and enjoy five delightful stories designed to put you in the Christmas spirit. 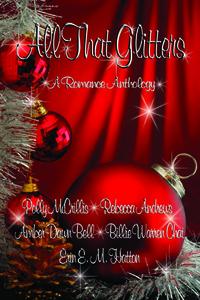 Make yourself comfortable and enjoy five delightful stories designed to put you in the Christmas spirit.

A Season for Justice by Rebecca Andrews

Matt Justice heads home from Thanksgiving festivities only to find a Southern beauty whose car is stuck in a snow bank.

Vanessa Ellsworth is on the run for her life. Headed for the Canadian border and safety, her plan goes awry when she finds herself stranded in a blizzard, in labor and about to give birth.

With her life and her daughter's literally in the hands of a stranger, will Vanessa find more than a safe haven with Matt?  Together, can they make it 'A Season for Justice?'

Muirne Cameron is looking forward to a life of her own, one of adventure and love.  But a mysterious omen in the ashes of the Yule fire, followed by the unexpected arrival of a wounded stranger on Hogmanay night, puts a destiny into motion she never expected. Will Muirne be forced to choose between her family and the handsome stranger she loves?

A Family for Christmas by Billie Warren Chai

Will five year old lovebirds, Jeffrey 'Jeffy' Cameron and Aimee Logan get their Christmas wishes for a family? Brianna Cameron, a single mother, struggles to raise her son, while Ethan Logan tries to master the mystery of a little girl.

But can they find a way to give their children an unbelievable Christmas presentA Family for Christmas?

After her father's death, country girl, Dani Chisholm, is left to run the ranch by herself. Heartbroken and financially ruined by a former flame, she refuses to take a chance on love again until a handsome lawyer from California, Thomas McKenna, unexpectedly enters her life during the holidays. Forced together by Mother Nature, the two share a closeness, relying on each other for survival.

But will she retreat back into her isolated ranch life? Or will Dani learn to trust again and take a chance on love?

Shores of Refuge by Polly McCrillis

It was a day on the beach for Nicky Lowell. Two of them. From 21st century California to the southern coast of war torn 1940 England, where she falls into the hands of RAF officer, Ellis Bevenger. Suddenly, the holidays are not at all what they had expected.