All's Fair in Love and War. It better be. When a grudge match between the gods of love and war catches the next generation in their battle, sparks will fly. But they won't be sparks of anger.

Five millennia ago, Davon -- Horseman of War, son of Ares -- insulted Eros, God of Love and Lust. Young and headstrong, Eros decided to teach Davon a lesson about his own nature. Until the young horseman can embrace the god of love with affection, he will be impotent. Such a loss for his lovers.

While Davon cannot stomach the idea of embracing Eros with anything but his hands around the other man's scrawny throat, Love will eventually find a mate and produce heirs that Davon might have a chance of liking, despite their parentage. After all, it is Love's nature to do so.

When two strange men who don't show up on film save Khrystal from a mugger, her life takes a turn toward the strange. Considering the fact that her mother is a psychic who is completely besotted with her husband, a man that left them two decades earlier, saying Khrystal's life has become weirder is saying a lot. 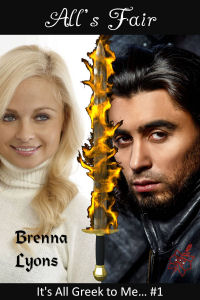 More From It's All Greek to Me

Davon marched toward Eros, his fury going from a simmer to a boil at the sight of the god of love's mocking smile. "Undo this," he demanded.

"Undo what, Horseman of War?"

"As if you don't know what I'm talking about? Undo whatever damned spell you've cast over me. Undo it now." Lachesis's laughter when his cock had failed him still rung in his ears. Davon was not a demigod to be toyed with, even if the toying was being carried out by a god.

The god in question's expression was all false sympathy. "Now you know as well as I do that a spell, once spoken, cannot be undone until the conditions are met."

"What are the conditions?" Whatever they were, Davon would meet the challenge quickly and get back to his usual amusements. It wasn't as if Eros could pose a test he was unequal to.

Eros took a swig of his Egyptian brew and smiled sweetly. "A test of your claim, Horseman."

"What claim? Stop playing games with me, lover boy."

"You claim love has no place in the life of a warrior. I intend to test that."

"I have to fall in love to be able to have sex again?" He was joking. Eros had to be joking. His father was proof enough that War had no place in his life for love, and Davon was certainly his father's son.

Eros made a noise that spoke of uncertainty or correction to be given. "You have to come to love someone other than yourself. Specifically, me."

Davon recoiled, the most literal meaning of that causing his mind to rebel.

"Then what is this test?"

"Until you can set aside your fury and pride and embrace me in an honest show of affection, the curse remains."

As if Eros read his mind, he made a clucking sound of censure. "It may take you a long time to admit you are wrong, I know. What a pity for your stable of lovers."

"I could always kill you," Davon suggested smoothly.

The laughter that answered him was dark and confident. "Without an heir to my powers poised to accept them? We both know what the other gods would do to you for it, and you're not even a god, Horseman."

But I will be. Soon.

Eros rose, sliding from the stool like a woman. "Oh...Horseman? Your hopes of using my bloodline to best the curse would be in vain. I have no children. I cannot produce children without my true mate. Surely, you know that about gods of love."

He hadn't. Davon cursed the Moirae for their interference yet again. Why couldn't all the gods have the same rules? The only two that seemed constant were the sacred ban on killing a god without heir and the legacy of promise or curse. In short, if a god or goddess made a promise or was part of a curse, it would pass with the power to each successor of that god until the promise or curse was concluded.

"It may be some time before I find my mate and produce children capable of replacing me."

"At which point, I can safely kill you," Davon reminded him. I look forward to that day.

"Not until my child takes a portion of my powers from me. It's the way of my kind." With that, Eros sauntered away; no doubt smug in the fact that Davon couldn't take revenge for what the god had done to him.

He will meet his mate eventually. How long can that take?

A niggling unease told him that he should have listened to the prophetess at Troy and stayed the hell away from Olympus. If Davon hadn't gone there and heard Eros boasting, none of this would have happened.

All I Want for Christmas is You
Brenna Lyons
In Shelf
$1.99