Angels Have No Wings

Life throws curve balls into everyday events even in the Oredal Quadrant. How the Oredals deal with those events, might decide an Oredals future. 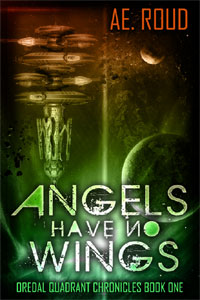 Angels Have No Wings

Millennia past, the Oredals designated the planet Prin, one of the inner planets, as an agricultural planet because of the vast variety of items that Prin could grow. Where other planets specialized in one or two items, Prin grew on average six to eight varieties, and produced more in a single crop.

Prin’s largest city, Sharpak, claimed title to being the fastest-growing population center on the planet since the inclusion of the Falory into the Oredal’s central planet system. All over Sharpak, new construction of homes, schools, stores and hospitals, pushed the building boom.

Several hours before dawn when most people, the exception being farmers, were asleep, an energy wave caressed the planet, creating an aurora borealis. On a small farm five miles outside of Sharpak, a female Falory, heavy with cub, was tending her morning chores, when the flash of lights and crackle of ozone overhead, gained her attention. She stood transfixed and watched the waves of brilliant green, red and blue lights flash overhead. As quick as it came, it ended.

With the overhead event over, she knelt down to cut the band on a bail of fodder, and felt a sharp pain course through her abdomen. The pain was severe and she grabbed the lower fence rail to keep from falling face first to the muddy ground as the first contraction tormented her body. When the pain receded and her head cleared, she used the fence for support and stood. She knew then, contrary to her pediatric life holder’s belief, her time to give birth was at hand.

She smiled as she rubbed her swollen body through her skirt. Under her warm hand, the large bulge moved. She stood mesmerized by the feel of the life within her until another sharp pain made her grab the top fence rail to remain on her feet. She focused on a distant barn wall and began to breathe as she learned to do at the local life hold classes to help expectant first time mothers through the experience of birth. When the contraction ended, the female Falory relaxed.

Her mind filled with memories of the many nights this cub kept her awake as it tossed, turned and kicked. She gave a low growl at the memories of her final months that tripled her urination and made her ill at the sight and smell of certain foods. Her memories included the pain at the loss of her partner. He was killed in a shuttle accident just three weeks before that morning. Another contraction raged through her body, and brought her back to the moment and her need to finish her morning routine.