Shortly after the Great Disaster, the Viro priesthood began to preach that our Earth Mother holds intrinsic values that cannot be compared to human desires, that machines brought the Earth Mother to the brink of mass extinction and that religious belief alone is insufficient to bring about the blanket changes needed to restore the Earth Mother to Her natural state.

As the centuries passed, a frustrated priesthood hierarchy accepted that humans are fallible and that political and social change would be slow. So a sect of fundamentalist Viros set about practising a policy of peaceful interference in Brizarian life with the aim to join state and the temples under one supreme ruler. But somewhere along the way and over the centuries, all good intentions had given way to avarice, ego and a policy of retribution against their foremost enemies, the Scavengers. 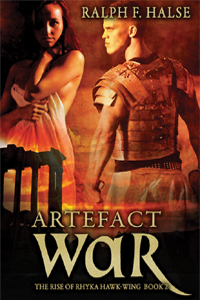 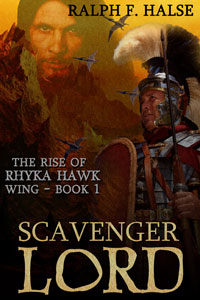 Greythorn had observed many stealthy killers in years gone by, but the apparition, draped completely in mottled grey and black, with a hood that extended from its shoulders to cover its face, sent shivers down his spine, for as the hood billowed slightly, he glimpsed the face within. Dark green, larger than normal, elliptical eyes set wide apart on a pale skinned face above a thin, sharp nose, along with a pointed, cleft chin below a small mouth with thin lips, and no eyebrows, stared at him.

The figures emerging from the bush were uniformly tall, taller than most humans, and lithely built. Even though they surrounded the three companions and were within a stone's throw, they moved with such stealth that Greythorn had still not detected a single footstep. The stark white hair that fell to the warrior's shoulders, within the hood, brought back disturbing rumours of a race long since believed extinct to Greythorn's mind. He could see pointed ears flicking back and forth, examining every sound before the hunter placed a foot cautiously forward. It seemed that the Elwarri were not a legend after all and it looked as if they were going to be killed by them. The figure before Greythorn, lifted one hand off its bowstring to make several intricate finger gestures. In response, the bulk of the band melted back into the forest, and still Greythorn had not heard a twig snap to betray any movement.