Luke has two purposes, hunting spirits and avenging his own death.

Pru has one goal, to return to her body, especially now that Luke is interested in her. Her memories of his shady past haunt her and keep her on guard around him.

Ignoring his teen infatuation with Pru, Luke looks for ways to exorcise her, while she must face the fact that she might never be united with herself again.

Amidst rogue spirits, ferocious drug smugglers, and unbendable celestial rules, Pru and Luke’s love demands a sacrifice that can snuff out their rekindled romance before it has even begun.

When Luke has to decide between his conflicting desires, which path will he choose?

And will the sacrifice be worth it? 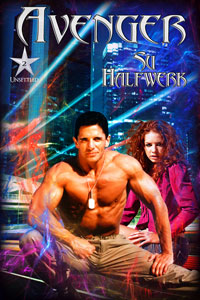 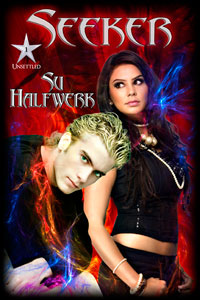 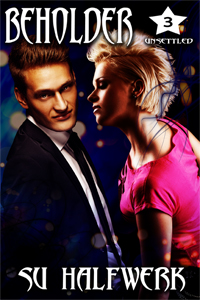 “Hey, you,” some moron screamed at the top of his lungs. Would these people ever consider adding a name when they call each other? Sheesh! Pru straightened up and resumed walking while massaging her middle.

“You, girl in violet shirt! Wait up,” the man shouted again. Yeah, adding an adjective might attract some girl’s attention. What a lousy pick up line.

She stopped in half stride. Hold on a second, she thought, I’m wearing a violet shirt.

“Yes, I’m talking to you. Turn around,” he said, more calmly now that he had her attention.

The resonance of his voice kindled a flicker of recognition in her. His voice, full of authority, demanded immediate yielding. Pru half turned, hope surging through her like an electric shock. She pointed at herself and asked in a shaky voice, “You’re talking to me?”

The man’s upper half was in shadows, but he seemed to still at hearing her voice. Anyone would if they could see through someone else.

“Pru?” He uttered her name in a husky and deep whisper. It did nasty things to her pulse.

He stepped out of the shadows. Long, muscular legs clad in black pants were revealed, the swagger slow and surefooted. The shadow receded and the man’s torso emerged. Black t-shirt stretched over a broad chest, outlining every bit of its firm muscularity. Raising her gaze, Pru encountered a firm mouth set in a smirk and deep cryptic, dark eyes that made her their sole focus. All that rugged handsomeness was topped by army style trimmed black hair.

“Luke?” Pru blinked, not believing her eyes. Occasionally, memories of her teen crush pushed through her mind for no reason and she used to push them back. She couldn’t do that now, those memories were in the front seat because he was standing right in front of her.

He just had to develop a voice that dripped awesomeness.

Pru shook her head. What’s wrong with me?

Luke gawked at her, his hands tucked casually into pants pockets. Pru had the impression he wasn’t as nonchalant as his appearance implied for meeting the girl who—according to him at the time—qualified to enter a mind-fuck contest.

Definitely tense. She chose to ignore his rudeness. “You can see me?” She rushed toward him then halted as memories of previous attempts to touch others surfaced in her head. They were nasty experiences that left her reeling with emotions alien to her.

“Are you looking for a place to stay?”

She tucked a runaway strand of hair behind her ear and frowned. “What do you mean?”

Slowly, he said, “Are you up for a stay?” His voice had an edge to it, one she didn’t trust.

He lowered his head and shook it. Perhaps if she explained her situation, he might know what she should do. “I guess I should be grateful for meeting someone. It’s been very lonely. No one to speak to—”

“And no one to possess.” A vein throbbed in his jaw.

She took a step back. “Possess?”

“Since I’m the only living person who can see you, I suggest you drop the innocent act.”

People gawked at him and changed paths as they neared him. It didn’t seem to bother him that others thought he was talking to himself.

Pru laughed, pointing a finger at herself. “You think I’m dead?”

“I know you’re dead,” he said through gritted teeth and pulled his hand from his pocket. “Time to send you home.”

Home was too far away, way beyond her lifeline’s limit. An ache pulsed in Pru’s chest and birthed a fury that paralyzed her with its intensity. Instead of facing her, Luke swiveled about, his gaze following a woman pushing a baby stroller. Pru ceased to exist for him and that infuriated her even more. She stomped a foot. “You don’t even know where I live.”

He kept looking at the other woman.

He tilted his head as though tuned to something else. Finally, he said, “Yeah, I see that.” His eyes flicked back to Pru. “I’ll have to give this one a rain check then.” Smirking, Luke lifted his hand and saluted her. “Catch you later, sunshine.” With that, he followed the other woman.

“Don’t call me that,” Pru shouted and dashed after him. After few strides, her breath caught and her steps faltered. Like a lasso, the invisible lifeline tightened around her mid-section, constricted her chest, and snatched her back.

She had overstepped her boundaries. 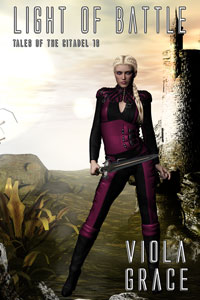 Light of Battle
Viola Grace
In Shelf
$3.99
Tweets by
sirenbookstrand