Ronnie--or as Mrs. Baumgartner insists on calling her, Veronica--has been babysitting for the Baumgartners since she was fifteen years old and has practically become another member of the family. Now a college freshman, Ronnie jumps at the chance to work on her tan in the Florida Keys with "Doc" and "Mrs. B" under the pretense of babysitting the kids. Ronnie isn't the only one with ulterior motives, though, and she discovers that the Baumgartners have wayward plans for their young babysitter. This wicked hot sun and sand coming of age story will seduce you as quickly as the Baumgartners seduce innocent Ronnie and leave everyone yearning for more!

"[A] must read for anyone who likes to read about beaches and sex."

I got out of the shower and dried off, wrapping myself in one of the big white bath sheets. My room was across the hall from the bathroom, and the Baumgartner's was the next room over. The kids' rooms were at the other end of the hallway.

As I made my way across the hall, I heard Mrs. B's voice from behind their door: "You want that tight little nineteen-year-old pussy, Doc?"

I stopped, my heart leaping, my breath caught. Oh my god. Were they talking about me? He said something, but it was low, and I couldn't quite make it out. Then she said: "Just wait until I wax it for you. It'll be soft and smooth as a baby."

Shocked, I reached down between my legs, cupping my pussy as if to protect it, standing there transfixed, listening. I stepped closer to their door, seeing that it wasn't completely closed, trying to hear what they were saying. There wasn't any noise, now.

My eyes wide, I could feel the pulse returning between my thighs, a slow, steady heat. Was she sucking his cock? I remembered what it looked like in his handeven from a distance, I could tell that it was big, much bigger than any of the boys I'd ever been with.

All?! My jaw dropped as I tried to imagine it, pressing my hand over my throbbing mound. Mrs. B said something, but I couldn't hear it, and as I leaned toward the door, I bumped it with the towel wrapped around my hair. My hand went to my mouth and I took an involuntary step back as the door edged open just a crack. I turned to go to my room, but I knew that they would hear my door.

Hearing his voice, I stepped back toward the door, peering through the crack. The bed was behind the door, at the opposite angle, but there was a large vanity table and mirror against the other wall, and I could see them reflected in it. Mrs. B was completely naked, kneeling over him. I could see her face, her breasts swinging as she took him into her mouth. His cock was standing straight up in the air.

"She's got beautiful tits, doesn't she?" Mrs. B ran her tongue up and down the shaft.

"Yeah." His hand moved in her hair, pressing her down onto his cock. "I want to see her little pussy. God, she's so beautiful."

"Do you want to see me eat it?" She moved up onto him, still stroking his cock. "Watch me lick that sweet, shaved cunt?"

I pressed a cool hand to my flushed cheek, but my other hand was rubbing the towel between my legs as I watched them. I had never heard anyone say that word out loud and it shocked and excited me.

"Oh god, yeah!" He grabbed her tits as they swayed over him. I could see her riding him, and knew he must be inside of her. "I want inside that tight little cunt."

I moved the towel aside and slipped my fingers between my lips. He was talking about me! The thought made my whole body tingle, and my pussy was on fire. Already slick and wet from my orgasm in the shower, my fingers slid easily through my slit.

"I want to fuck her while she eats your pussy." He thrust up into her. His hands were gripping her hips and her breasts swayed as they rocked together.

My eyes widened at the image he conjured, but Mrs. B moaned, moving faster on top of him.
"Yeah, baby." She leaned over him, her breasts dangling in his face. His hands went to them, his mouth sucking at her nipples, making her squeal and slam down against him even harder. "You want her on her hands and knees, her tight little ass in the air?"

He groaned, and I rubbed my clit even faster as he grabbed her and practically threw her off of him onto the bed. She seemed to know what he wanted, because she got onto her hands and knees, and he was fucking her like that, from behind. The sound of them, flesh slapping against flesh, filled the room.

They were facing the mirror, but Mrs. B had her face buried in her arms, her ass lifted high in the air. Doc's eyes were looking down between their legs, like he was watching himself slide in and out of her.

He grunted and drove into her harder, and I watched her shudder and grab the covers with her fists. He didn't stop, thoughhis hands grabbed her hips and he worked himself into her over and over. I felt weak-kneed and full of heat, my fingers rubbing my aching clit in fast little circles. Mrs. B's orgasm had almost sent me right over the edge. I was very, very close.

I leaned my forehead against the doorjamb for support, trying to control how fast my breath was coming, how fast my climax was coming, but I couldn't. I whimpered, watching him fuck her and knowing he was imagining me me!

"Come here." He pulled out and Mrs. B was turning around like she knew what he wanted.

When I opened my eyes and came to my senses, Mrs. B was still on her hands and knees, focused between his legsbut Doc was looking right at me, his dark eyes on mine.

My hand flew to my mouth and I stumbled back, fumbling for the doorknob behind me that I knew was there. I finally found it, slipping into my room and shutting the door behind me. I leaned against it, my heart pounding, my pussy dripping, and wondered what I was going to do now

The Baumgartners Plus One
Selena Kitt
In Shelf
$3.99 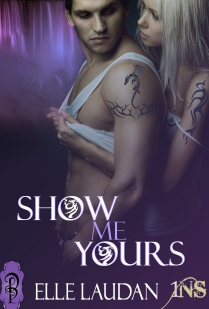 Show Me Yours
Elle Laudan
In Shelf
$2.99
Tweets by
sirenbookstrand