When Katie reminds Dan of the bet he made with her, which to him had been meant as a joke, he reluctantly agrees to his promised reward of a weekend for two. When he finds the young woman missing from their cabin at the lake and notices that the screen door has been very deliberately and precisely cut, he fears that Katie has been kidnapped. The man who knocked on the door of the cabin earlier had seemed a little nervous, but is Katie now in the hands of a killer, or is her disappearance just another of Katie’s fairly harmless pranks? 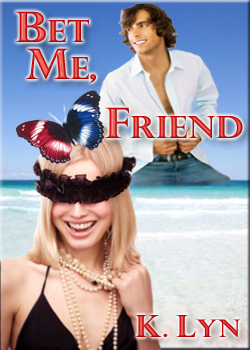 Dan cursed as he stubbed his toe on the way to the door. Who the hell was knocking in the middle of the night, especially way out here? His hand was on the doorknob, and then he immediately backed away. He had watched too many murder movies. “I’m the perfect victim out here alone.” He cleared his throat, and tried to sound tough. “Who is it? I have a loaded rifle in here?”

The giggle that followed was too sweet to make Dan angry. He opened the door, and Katie walked right past him, trying to stifle a giggle. “Where’s your loaded gun, tough guy?”

“It’s three in the morning, Katie. You don’t drive by here by accident. What gives?”

“A bet’s a bet,” she stated, as if Dan was supposed to know what she was talking about.

“You forgot our bet?”

He leaned over as if to bow. “Forgive me, Miss Katie. It must have slipped my mind.”

Dan was sleeping soundly when the screen door in the living room was very carefully and decisively cut and a stranger dressed in black entered the living room. The hooded man turned briefly to look down the hallway. Then he wasted no time getting what he had come for.

Katie awoke to a cloth being shoved into her mouth and tied around her head. She tried to fight but the stranger wrapped the blanket around her and easily carried the protesting small body out the screen that he had so easily cut. Katie struggled as hard as she could to get away from the man she did not know. He pushed her legs against her chest and threatened her. “Stop struggling, Katie, or I will kill you. Your young tight body will be found at the bottom of Tuttle Creek Reservoir.”