Chase Willet, DEA agent, is destroying the business of high dealing drug lord, Ramiro Gonzalo Sancho Rivera. It’s not enough that they’ve already put a large chunk in the import train. They have to take Rivera out.

Brandy Montgomery is the red head that swept Chase off his feet. She’s sexy, smart and has a secret. She’s is a hired gun for Rivera and is spending time softening Chase up so that he won’t be prepared for the kill.

The problem with Brandy’s plan is that the more time she spends with Chase, the more she falls for him. How can she do her job if she’s in love with the man? And when Chase finds out what she’s really up to he feels completely betrayed until Brandy offers to help him take down Rivera. But she’s fooled him once before. Can Chase trust her this time? 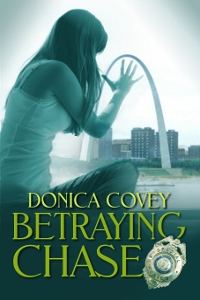 He grabbed her into an embrace. “Are you cold?” He pulled the covers up close and squeezed her tight. “I won’t let anything happen to you. I’ll die first.”

He grew quiet and the time seemed to drag. She knew he wasn’t going to be able to go back to sleep. She also knew sleep would avoid her like the Black Death.

He pulled away. “I’m going to take a shower.” The mattress shifted and the comforting feel of his body left a chill in its place.

He disappeared into the bathroom and once more she trembled. The only way to keep both men off her was to do the job. She’d collect the bounty, leave enough evidence to destroy Rivera for good and disappear.

Her gaze flickered to the desk where the gun was locked away. Inhaling a deep breath, she left the bed and opened the drawer. Once more, she pulled out the box holding the gun, unlocked it and hefted its cold weight in her hand. Leaving the desk, she moved to the bathroom door. The sound of the water running muffled through the wood she placed her hand on the knob.

You just have to open the door, shoot him and get out... The door slid open with a quiet creak. Steam filled the room and through the haze, she could see his silhouette on the curtain. Raising the gun, she aimed it at him and her finger applied slight pressure against the trigger.

Who's Afraid of the Big Bad Wolf? (MMM)
Stormy Glenn
In Shelf
$2.99
Tweets by
sirenbookstrand