An intimate tale of love, sex and loss.

What happens when the line between love and despair is blurred? Sabrina must find out if she has room in her heart for both. Her devoted, disabled husband has planned a Valentine’s Day to remember. Her biggest surprise – that unrestrained passion can heal her deepest wound. If Sabrina can let ecstasy wash away her pain, she will have been given the most valuable Valentine’s gift of all: a love that endures through eternity. 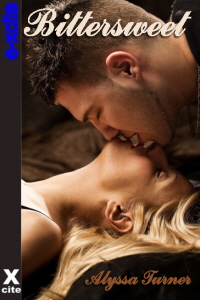 Keith was new to the professorship, but he was well respected in the Anthropology department for his two books on the cultural rituals of Ancient Greece. I had read them both and found his descriptions of matriarchal ritual to be blatantly sexualized. Just like a man, I thought and vehemently made my position known, if not in so many words.

I can still hear his response: ‘Sabrina, your opinion is merely born of your contemporary perspective. Women of Ancient Greece were considered dangerous for their sexual power; therefore, their sexuality is the most poignant topic to explore.’ He took off his glasses, sizing me up for the challenge with an unwavering glare. ‘Perhaps you will learn something in this course after all.’

As it turned out, I would have plenty to learn from Keith – especially how a man could come to know my body better than I did.

It started with one seemingly innocent invitation to share a table at the corner coffee shop before class. The energy between us was undeniable, and I even hesitated a bit before sitting down with him. I wasn’t a rule breaker, and something told me that I would be tempting fate if we gave ourselves a reason to violate the non-fraternisation policy. Still, I spent an hour with my espresso just as captivated by his confident smile as I was by our cerebral acrobatics. I could tell he was enjoying himself too, and it wasn’t long before sidelong glances and witty double entendres turned into secret meetings for a more hands-on approach to learning. By the time I earned my degree, we had been fucking for months. And with the conversation as stimulating as the orgasms, I agreed to marry him a year later.