In 1934, life in Brookburn, Indiana, is quiet, simple, and peaceful, but young dreamer Levi Beckerman yearns for more. When the carnival shows up for the Fourth of July, he’s entranced by its many temptations. None is more seductive than the charismatic barker, Sebastian Gustineau.

Seb’s been a part of the carnival for almost a decade. Once, it provided him the escape he needed from a life he thought he didn’t want, but now, he craves things it can never offer. Flitting from dusty town to dusty town, he loses himself in pretty dalliances. Levi seems like the perfect distraction, until a single conversation convinces him that preserving Levi’s innocence and way of life is more important than his momentary satisfaction.

However, his plan to discourage Levi goes horribly wrong. When Levi’s family is threatened, Levi fights to protect them, doing what he can to hide the secrets he’s sheltered his entire life. The only person he trusts is Seb. He just isn’t sure if the growing bond between them is enough to save them all. 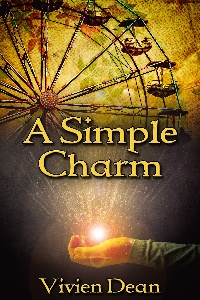 Seb crept around to sit next to Ring Toss, watching Levi work. Levi ducked his head, focusing on squaring the cards in his hands, corners smooth, before he set to shuffling. He went faster than normal, nerves a-jangle from Seb’s attention, but pouring his energy into the edge-worn deck helped him not to lose control of them. He hadn’t dropped a card since the first time he’d picked some up at the store. Lord knew he didn’t want the first time to be in this man’s presence.

“I need you to pick a card, gentlemen.” He fanned the deck out and thrust it forward. “Each of you. Just pull it out, look at it, show your neighbor, then stick it back anywhere in the deck.”

Their smiles were indulgent as each reached forward, Ring Toss first, followed by his partner, with Seb taking up the rear. Levi recognized those looks. Too many had been aimed at him over the years, though usually by the older women in the community who wondered what kind of good he would ever bring to Brookburn. He knew how to ignore them. The one from Seb, though, that one stung. He’d hoped Seb would understand, but how could he? Levi hadn’t shared his secret, no matter what kind of pretty words Seb threw in his direction.

The trio made a show of holding their choices close to their chests, leaning together to share which each had drawn. Levi refrained from rolling his eyes when they traded them around, each ending with a card not the one he’d chosen. This was their way of messing with him, but it wouldn’t matter in the end. He looked forward to seeing their faces when the trick was over.

“Here.” Ring Toss slid his card in first. Levi wondered why he was playing the leader here and not Seb, but when their fingers touched as Seb took his turn, they shared a quick glance, bereft of the jocularity that had transpired between the carnies.

Levi read the look in his eyes with a jolt that went straight to his toes. You don’t have to do this, it said. Except what Seb didn’t know was that he did, he had to, because if he couldn’t do it here, there was nowhere else to run to, nowhere else that might embrace someone like him.

Once all three cards were back in the deck, Levi began shuffling them nonchalantly, his gaze on his audience rather than his hands. “What is it you think’s going to happen here?” he asked.

Ring Toss grinned. “Isn’t that your end of the bargain?”

Levi shrugged. “Could be. I guess I’m just curious how these games play for you.”

“We don’t have a cardsharp,” Seb said.

His words were meant to tear him down, but Levi shrugged them off. “I guess maybe it could be,” he conceded, even when he didn’t feel that way at all. Bringing the cards up to his mouth, he blew through the deck, closing his thoughts to everything but the weight in his hands. The visual of which three the men had chosen leapt to his mind’s eye, but it wasn’t enough to know what they were. He needed to impress the carnies, especially Seb.

One more step, then.

Levi pressed his lips to the cards’ edges, breathing out his silent plea. As Ring Toss smirked at what he deemed an imminent failure, Levi twisted his wrist and flicked the cards into the air.

Though it happened in only a matter of seconds, he saw each unique trajectory as they fluttered to the floor. The three cards he needed held a certain glow, one only he could see, the bond he’d created between him and them as tangible as the weight of Seb’s arm had been around his back. The thrill of doing this in front of people raced through him, better than the one time he’d convinced Mr. Grayson to pay him with a beer for a special delivery he made. Never before would he have considered such a risk, but never before had he been confronted with a prospect like this.

The trio landed exactly how he wanted, face up on top of all the others that buried their identities to the floor, each in front of the man who’d originally drawn it from the deck. Seb was the first to look up sharply from the two of spades at his feet, but Levi kept his expectant smile in place while the others took a moment longer to join in the shocked reaction.

“How’d you do that?” Ring Toss demanded. 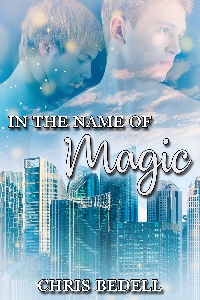