One man finds love and sexual satisfaction with the last person he expects -- his wife ...

At twenty-two, Amanda Stevenson is tired of being treated like a child. Unfortunately, her parents are devoted to controlling her life, and they're not above using blackmail to get their way. Their greatest weapon is the final two years of her college education, which they wield against her without remorse. Amanda's choices are limited. But her former professor and current friend, Jack Navis, has a suggestion -- Amanda should marry him and take advantage of the university's tuition remission policy.

Jack is sure he can keep everything between himself and Amanda platonic. Especially since he's a fetishist. He needs to watch people having sex in order to achieve his own satisfaction, and he doesn't enjoy participating in sexual activity with anyone. He's sure of that ...

Until he kisses Amanda. And when they kiss, their world is thrown into chaos with new emotions, unexpected needs, and driving hunger ... 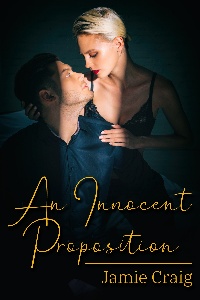 Three days in Vegas was the perfect way to unwind after the end of an insane semester. There were shows to be seen, money to be lost, and candy-colored nights stretching to dawn. This wasn't the first time Jack had been to the city, but it was the first time he'd come with an ulterior purpose to relaxing. Because even a marriage of convenience had its stresses.

As willing as Amanda had seemed to accept his offer, her demeanor since dinner at his house had shifted slightly. There was a trepidation that hadn't been there prior to his proposal, and while she was still the sweet, intelligent woman he knew her to be, it was tempered with a new reserve he didn't know what to do with. So Jack decided to take the bull by the horns, so to speak. Or the elephant sitting in the corner by the tusks.

"Let's do it tonight," he proposed as they waited in line to check in at the Mirage. Amanda looked at him with wide eyes, and he hastened to add, "Get the wedding out of the way. We'll enjoy this weekend a hell of a lot more if we're not both thinking about what's going to happen on Sunday for the next two days."

She agreed without argument, offering him a brilliant smile when he deliberately booked separate rooms. Three hours later, they were back in the lobby, a marriage certificate in his hand, and a gold wedding band on hers.

"So now what? A drink to celebrate your freedom?"

Amanda hesitated before nodding. "It'll be a night of firsts. So to speak."

"You've never had a drink before?"

"No. My parents aren't drinkers, and after I started school, it never came up. Plus, I wasn't sure I'd even like it."

"Then maybe we should get some food in you first." He looked around at the lines of people waiting to get into the restaurant. "How about we order some room service and get a nice bottle of wine? That'll be nicer than sitting in all the smoke and noise anyway."

"I could definitely do without the smoke."

Jack briefly touched her arm, guiding her toward the elevator bank. She very rarely instigated any sort of contact between them, but she also pulled away less when he did touch her. She seemed preoccupied while they rode up to their floor, and he didn't say anything to interrupt her thoughts. Their rooms were side by side, and she paused when she reached her door.

"Your room or mine?"

From anybody else, it might have sounded suggestive. But there was no guile in Amanda's wide eyes.

"Yours." Jack smiled. "Then you can kick me out whenever you want."

Amanda fished the keycard from her purse and opened the door, stepping inside first to turn on the light. The room was identical to his, except with small touches indicating Amanda's occupancy. Her floral suitcase on the second bed, her shoes discarded near the closet, a towel draped over the back of a chair. It smelled like her, too. Perfume, or body wash, or conditioner -- Jack wasn't sure what it was, but it reminded him of lilacs.

She dropped her purse on the table and flipped open the menu. After perusing it for a few moments, she blanched. "My god. Twelve dollars for a cheeseburger?"

"Stop looking at the prices of everything."

She'd done that at the chapel, too; it had taken all his persuasive powers to get her not to worry about it. Plucking the menu out of her hands, he looked over the wine list, selecting the nicest white he could afford before picking up the phone.

"We're on our honeymoon. One night of extravagance isn't going to kill my bank account. Now what do you want?"

"Well, a cheeseburger doesn't seem right for a honeymoon. Is the steak and shrimp okay?"

Jack just smiled. Three minutes later, two steaks with shrimp, two chocolate cheesecakes, and a bottle of chilled chardonnay was on its way.

"So do we throw caution to the wind and order a movie, too?" he asked after he hung up.

"Maybe later. After dinner." She sat on the bed and eased her shoes off. Once the shoes were gone, she unclasped her thin bracelet and the gold chain around her neck. "Remind me not to wear these again while we're here. These shoes are not made for walkin'."

Twining his fingers, Jack stretched his arms in front of him and cracked his knuckles. "Lucky for you, your husband happens to give great foot massages then." Sitting opposite her, he held out his hand. "Pass it over."

Amanda looked at him doubtfully for a moment before resting her ankle in his palm. "I appreciate it, but it's not really ... Oh." He flexed his fingers around her tight tendons, finding the pressure points and working the tension from her muscles. "You weren't kidding, were you?"

They sat there in silence as he stroked the sore muscles, pressing into the arch of her foot as he kneaded down to her toes. Her lips parted, and her breath deepened as he smoothed out the kinks, and when he carefully set it down, she lifted the other without hesitation.

"Is it as bad as you thought it was going to be?" he asked, glancing at her through his lashes.

"Marrying you? Or getting married in general?"

"No." Amanda grinned. "But then I wasn't counting on steak and shrimp and a foot massage, either. If I had known this was part of the package, I would have agreed immediately." Her smile faded and she looked at him with thoughtful eyes. "I never thought it would be bad marrying you, Jack."

"But you were cautious. Justifiably so. For all you knew, I was a dirty old man, just trying to get into a hot student's pants."

Amanda laughed with obvious amusement. "I never thought of you as a dirty old man. Besides, I can tell when people are trying to get into my pants."

"You know ... if you meet somebody, sometime between now and when we call this quits ... it'll be okay with me if you want to see him."

"Thanks, but I don't think that'll be an issue. It's been easy to stay smart for the past four years because I haven't met anybody ... tempting."

"Never say never. Look at us. Two weeks ago, did you think we'd be sitting in Vegas on our honeymoon?"