Asher and Erik are getting married, but Asher isn’t happy about the pressure being put on him by their families and unwittingly by Erik himself. Issues that have plagued him for a long time come bubbling to the surface and threaten to overwhelm him. Although he cries out for help, no one hears; instead they write it off as Asher throwing a tantrum again. Only Angel sees the cracks, but it’s too much for him to handle on his own, although he tries.

The pressure builds, and even though there are breakouts, still no one sees the extent of the problem until the night before the wedding, when Asher is confronted by Erik in front of all their family and friends, and bolts.

Fortunately, Asher is rescued by Vince’s Uncle Tony, who makes him an offer he can’t refuse.

The Band heads off to London for a three-month tour, and not everyone is happy about it. Vince is stressed out and worried that Angel is not being entirely faithful. Should he say something? Then Connor meets an old friend, just when he starts having doubts about his relationship with Angel, and the fur starts to fly.

Will any of the couples survive? 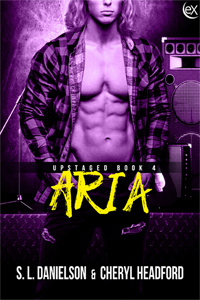 Vince smiled to himself, thinking how the past year had seemed to fly by. He and Billy were doing great, which was the best. It had taken a while, but they’d finally found a great house and were enjoying every moment. Several months ago, they had talked Daisy into being a surrogate for them, and Joey was constantly by her side for support. Angel was back in the States, attending the art school of his dreams while Connor was still in Ireland, working on completing his schooling for construction. Then, of course, there was Eric and Asher. Poor guys had been living the wedding planning nightmare, but only had a few more days to go.

Dripping fat hissed on the brand-new barbecue, and Vince moved some of the hamburgers over so they wouldn’t get singed. The grill was full of meat of all kinds—chicken, burger, even a couple of steaks. Erik had a huge appetite, as did Daisy, ever since her pregnancy.

Vince had cut back on his own food intake, and the proof was in his new wardrobe. He’d lost 30 pounds since the marriage a year ago. Amazing, since he was a chef, with only a year to go to complete culinary school. He wondered whether Billy saw him any differently now he’d lost the weight but decided not. Billy loved him just as he was, and that was the key to everything.

As if he knew Vince was thinking about him, Billy appeared at his side and draped his arms around Vince’s shoulders. Vince shivered as his husband kissed his neck. “Hey, baby. How’s it going out here on your new toy?”

Vince hooked Billy with one arm and held him close. “Just great. Love this thing. It’s perfect on this huge patio. Beats the old house of ours hands down.”

“Yeah, but we had lots of memories there, didn’t we?” Billy’s playful tone made clear which memories he was thinking about.

“That we did, my love.” Vince kissed him softly. “How’s everyone doing? Dinner’s almost ready.”

“Meh, doing pretty good. Daisy’s eating everything in sight. Our children will be well fed. Course, with you as their awesome daddy, they will be anyway.”

“Look who’s talkin’, Billy Caliendo. You’ll be the best daddy, too. You’ve got such a sweet demeanor—funny, smart. You can teach them the drums.”

“Oh, definitely! Watch them pick up Mommy’s guitar skills, though. Uncle Erik can teach ’em how to sing. We’ve got a band in the making. Connor and Angel can show them how to build toys, then paint them. Asher, too.”

Vince stifled a laugh. He flipped the food a final time and put it on the serving platter. “All right, let’s go eat. I’m starved.”

They brought the food into the house, and everyone stood in a somewhat orderly line to fill their plates. There were multiple salads, meats, and other dishes, most of it handmade by Vince himself.

They all strolled outside to the patio table. “So, a toast to our new house!” Billy offered.

“Love the peace,” Asher sighed, with a pointed look at Daisy.

“We wanted a good chunk of land, not to be crowded into housing lots,” Vince replied. “Eventually I’d love a few acres and a ranch style. By then I’ll be an old man.”

Billy laughed. “Old man. Listen to you. You’re all of twenty-one-years-old, baby. If you’re old, I’m old…and so are all of us, so let’s not even go there.”  He glanced up at Erik. “So, six days to go! Are you so excited you can’t sleep? Gettin’ married? The ol’ ball and chain?” He kicked Erik’s chair.

“Ha, ha, I’m fantastic. I’m really stoked about this. Life’s good, The Von’s doing great, and we’ve got our new house. Once it’s fixed up, it’ll be the talk of the neighborhood.” He took Asher’s hand. “Best of all, it’s ours.”

Asher smiled and squeezed Erik’s hand. “I can’t wait to move in. Can’t believe those stupid rules and regulations. Who the fuck cares if there’s electricity, or a floor in the kitchen, or walls in the studio? We’ve got candles, and there’s running water. It’s fucking nuts that some official in an office somewhere gets to decide when we can move into our own house. It wouldn’t happen in the UK, and you think we’re crazy.”

“Those are the rules. Gotta be safe and livable.” Joey waggled a finger at him. “Oy, Connor told me half of what he had to learn was all the building codes. Although, to be honest, I think he can’t wait to get hands-on with the building again. The business course is driving him crazy. He’s about ready to rip his hair out.” He laughed into his glass.

“Better not, Angel would kill him!” Billy joked. “They come in when, Wednesday? I can’t wait to see them again. Thank goodness for email and Skype.”

“Amen to that one,” Erik added. “Anyway, I love your house almost as much as ours. It’ll be boss for you and the kids.”

“Thanks, Erik. Yeah, we looked at what, twenty before we chose this one? It had to be kinda changeable, but not a wreck either.” He looked at Daisy. “How’re you feeling, Daisy? You know we’re indebted to you for the rest of our lives for this amazing thing you’re doing for us.”

“Hey, I couldn’t think of two people who deserve children more, and I’m absolutely made up that I can help you. If I’m honest, if you’d asked me a year ago whether I’d ever consider being a surrogate, I’d have laughed in your face.” She laughed. “Actually, I did laugh in your face when you first brought it up, but it didn’t take much thought to change my mind.”