Is it real or is it fantasy? That’s the question MISix Agent Mathilda Honoria Spencer struggles with on her latest assignment. Tasked with discovering the whereabouts of Lady Annabelle Trask, Tillie is thrust into a world of Hucows and other human animals. It’s a world that raises serious questions about sexual fetishes, intentional physical enhancements, and even pornography, but in the end, Tillie has only one mission—to rescue and return Lady Annabelle to the Queen. However, as she and her partner, Agent Abdul Ali, attempt to find Lady Annabelle and keep her out of the clutches of terrorists bent on destroying the monarchy, they must also wrestle with their feelings for each other. Can they draw the line between their duty to the Crown and their relationship with one another? Or must they embark on separate paths to continue to serve the Queen? 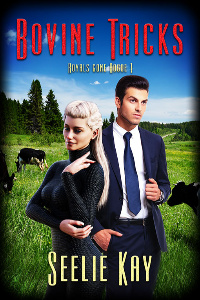 Mathilda Honoria Spencer—called Tillie, for short—placed her binoculars on a nearby rock and took a long sip of water from a sports bottle.

In a posh British accent, she said softly, “I don’t know, sir. The only humans I see are men—farm workers, I suppose. I haven’t seen a single female, except for cows, that is.” She giggled. “And I couldn’t tell a male cow from a female. I was raised in Gunnersbury. The only cows there were middle-aged women.”

Tillie intentionally spoke distinctly. There was no hint of her youth—spent in a working-class neighborhood that dropped t’s and h’s as a matter of course. Tillie had worked hard to refine her speech and had learned to speak in the polished Queen’s English. Her latent Cockney accent came to light only in times of extreme stress or when she was undercover.

Her earpiece squawked. “Well, as it happens, you are looking for human cows. Female ones. Did you not understand the assignment?”

Tillie grimaced at the offense to her ears. The new communications devices MISix used were groundbreaking, but the squeaks and squawks delivered to the inner ear were most unpleasant. She blamed it more on the careless user than the device. She tapped on her earpiece. Take that, you wanker. “I know what was reported, but all of my research points to a big old modern-day fantasy. Human cows are a myth. They have to be. There is no other explanation. Someone is pulling our legs.” She sighed. “What a waste of our time.” She picked up her binoculars again. “I will give it another hour, then I’m coming in.”

The man at command grunted. “Actually, Agent Spencer, after an hour you will be taking a closer look. You will sneak onto the farm and investigate. We have a confirmed report that there are Hucows on the premises and one of them is a member of the royal family. The Firm wants her found and extracted as soon as possible. It is our sworn duty as members of MISix.”

“I think MIFive is better suited for something like this.” Tillie’s voice assumed a bit of snark. “After all, it’s domestic. We are only responsible for international activities that threaten our citizens. This certainly does not apply.” Tillie was well aware her tone was bitchy, but for crying out loud, here she was, in the middle of Devon, watching cows. She was much better suited to issues involving international sex slave trafficking and other forms of forced servitude. While rescuing members of the royal family had become her specialty, operating on domestic soil was risky. Given her fondness for high society events, she could be recognized and her cover would be blown.

“Except this is right up your alley. We suspect it is about slave trafficking. And it is international. If what has been reported is true, this farm is operated by an American corporation that specializes in trafficking young women in the fetish world, in particular, human cows, pigs, cats, dogs, even horses. Their buyers come from around the world. When matters cross borders, it falls within our jurisdiction.”

Tillie scrunched her nose. “Why do we always get the cases that are so repugnant? If people are interested in screwing animals, why don’t they just…”

“Because, Agent Spencer, bestiality or animal abuse, is a crime. However, there is nothing criminal about humans who dress up as animals and engage in sordid activities based on fantasy. That is, unless they are forced into it to satisfy someone’s prurient interests. In the case of Lady Annabelle Trask, we do not know if her participation is voluntary. We have heard that she has undergone a rather extreme physical transformation, possibly in America. That may be a crime. We may be looking at a case of involuntary maiming and mutilation.”

Tillie grimaced. “What sort of transformation? It’s not like you can transform a human into a cow, or God forbid, breed a human and a cow.”

Her superior emitted a long-suffering sigh. “I am well aware you were provided with photos and videos, Agent Spencer. Did you not peruse them?”

“Is it?” he asked softly. “Plastic surgeons might argue with that. They have been known to produce women with all sorts of physical anomalies. They can transition a man into a woman and vice versa, so why couldn’t they transition a human into an animal, or the very least, make them look like one?”

“That’s just sick. Really sick. No right-thinking man or woman would submit to becoming an animal.” She shuddered. “I can’t believe anyone would go that far.”

“Well, as you read, we have received reports of at least twelve women currently being transitioned on that farm. One way or another, they have developed udders. They are milked daily and forced to behave as heifers. Then they are abused sexually. Some are used for breeding and their babies are sold on the black market. Some produce breast milk, which is also sold on the black market. Others are traded freely at private auctions for sexual exploitation. My God, some even moo.”

Tillie peered through her binoculars. “Sir, I’m telling you, all I see down there are cows and they all appear to be, well…bovine.”

The man fell silent for a moment. “If we can’t find sufficient evidence to conduct a raid, we may need to insert you into the process. I suggest you get as close as you can and take a look around. Otherwise, you may be going in as a prospective Hucow.”

Tillie gasped. “Are you fucking kidding me? There is no way I am going undercover and risk being transitioned into a cow or a pig or chicken. You can’t ask me to take that risk.”

Tillie felt her blood run cold. She had been asked to do some crazy things and put herself in dangerous, life-threatening situations. But this was unacceptable. “Look, I’ve already gone above and beyond for MISix. I was kidnapped by a sex trafficking ring. Then I infiltrated a cult and spent six months in the Peruvian jungle, serving as one of the leader’s sex slaves. And I was the target in that false imprisonment scam, at the behest of the Yanks. I was the one who went undercover to rot in a prison. I have performed well in each assignment. I don’t deserve this.”

“Did it ever occur to you that Her Majesty has personally requested your services? Again, I might add. It is a matter that requires the utmost discretion. We don’t know if this royal is playing out some fantasy as a cow, has been forced into pretending to be a cow, or has been enslaved and turned into a cow. All of it is unsavory and the Queen wants it dealt with. She wants her relative extracted and returned to the human world. We don’t know if she is there willingly, but most certainly, some sort of psychological rehabilitation will be involved. And if there has been a physical transformation, the Crown will have even more problems. This matter simply cannot be exposed to the public. The rags will have a field day. And the anti-Monarchists will use it to prove the royals are unfit to lead due to mental defect.” He added, “If you fail, this could topple the Monarchy.”

“Oh, bloody hell,” Tillie muttered. “So even if I’m buried up to my eyes in pig shite, I need to make sure I come out smelling like a rose.”