The council was created to keep all shifters and supernatural safe, and to do so, they need people on the ground. That’s where the enforcers come in—they’re divided between every council member’s territory and are tasked to protect the supernatural population against anyone who harms them.

But the enforcers are also human, and one by one, they find their mates. It’s not always easy to balance their private and working life, but they have a very good reason to do it. 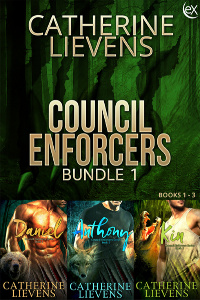 Sometimes being nosy isn’t such a bad thing.

Daniel knew going to look for shifters with his best friend Anthony wasn’t a good idea, but he never expected it to end like it did. Now he has a new job with Kameron Rhett, the Gillham pack alpha, and he loves it. He enjoys being around shifters, and even more being away from his house and his alcoholic father.

Bran Morris’ first meeting as the head of the council enforcers takes him to Gillham. Kameron needs to make a decision about coming out to the town, and Bran is supposed to help with it. He never expected to meet his mate, not after losing his wife and child thirty-six years before.

Daniel and Bran hit it off right away, but when Daniel’s father becomes a problem, Daniel doesn’t know what to do. Should he live his life and be with his mate, or should he stick with his father to be sure the man doesn’t hurt himself? What would happen to his relationship with Bran if he chooses his father?

Sometimes being in the wrong place at the wrong time isn’t that bad after all.

Anthony is so clumsy he might as well have invented clumsiness. He has daily encounters with the ground and walls, but he manages to stay mostly healthy—at least until he literally falls on his face into a meeting organized to plan Kameron’s death.

Rob just came back from a three-week mission in the jungle, and the only thing he wants to do is sleep. Of course, that means Kameron calls him of all people to protect Anthony. He hadn’t expected Anthony to be his mate, and it makes up for the lost sleep.

Rob has his work cut for him defending Anthony from walls and the men plotting against Kameron, but it’s not his only problem. Anthony is reluctant to believe Rob is here to stay, and Rob isn’t sure he’ll ever be able to convince him. Will Anthony finally see the truth in Rob’s words, or will problems find him before he can?

Sometimes you have to step out of your comfort zone to find happiness.

Kin always knew his job as an enforcer wouldn’t last forever. His mother is planning his marriage, to a woman she’ll choose to help advance their family name and fortune. The only way he has out of it is finding his mate, but there’s no quick or easy way to do that.

Saul has thought himself crazy for most of the past ten years. He sees half-transparent animal faces layered on some people’s human faces, and he voluntarily walked into a psychiatric hospital when he was twenty-three. Now he’s thirty-four, and he feels like he missed out on life. When his sister pushes him into leaving the hospital, he hesitates, but she won’t take no for an answer, no matter how much their parents pay Saul’s doctor to keep him there.

When Kin and his team are sent to make sure Saul gets out without any problems, Kin expects the mission to be routine. Instead, he knows Saul is his mate as soon as they meet. Will Saul finally manage to walk out of the hospital? And is Saul really crazy, or is there an explanation for what he can see?