Experts in martial arts, weapons, and world history, they are Agents of Time. They travel in time in order to track down and kill vampires, werewolves, and those who might fool around with the space-time continuum.

Lorenzo is from Italy. Marie hails from San Diego. Both are as completely different as two people can be, but they have one thing in common—both have had a close encounter with a vampire named Tasia, and lived to tell about it. And it’s their destiny to track her down and kill her. 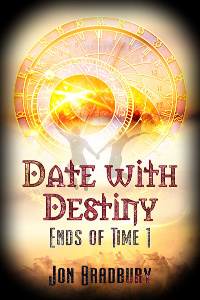 More From Ends of Time

Not sure why I’m going back to when it all started. But it couldn’t hurt. Every story has to start somewhere. And this one begins here.

Although, just to let you know, other voices will take over the story at certain points.

But yes, way back in the depths of time, five hundred years ago from the old house, to be exact, was when all this first started.

Who could have known what was set in motion on that idyllic spring evening in  the Year of our Lord 1519? Certainly I could not have chosen a more picturesque place to begin my apprenticeship as a blacksmith, in a monastery right on the shore of the Mediterranean Sea, nearby the small village of Terracina. I was, at the time, only a boy of 19.

Oh, my manners. Forgive me.

My name is Lorenzo. I cannot remember the rest of my inherited names, as they, too, are lost to the depths of time. Perhaps someday, once this adventure is over, I might get permission to revisit the time of my life and find out, and put my full name in this journal.

But I remembered that fateful day as if it had happened yesterday.

I was taking my evening stroll along the sandy white sea shore, just as I usually did, taking in a truly glorious sunset, staining the horizon warm red and fading through various colors like a layer cake, until, near the top, the sky was a delicate, nearly transparent shade of purple.

Soon that light show would fade from the sky, leaving only velvety midnight blue behind. Perhaps the stars would be just as glorious, if there were no moon tonight.

But my contemplation of the sunset was disturbed by the sound of rapid footsteps coming up behind me.

“Master Lorenzo.” The voice was male, and sounded rather out of breath.

I stopped and turned around. Rapidly approaching was Father Ferrari, the most senior monk at the monastery. He was a man of middle age, as I remembered him, tall and solidly built, with a full head of salt and pepper hair and the usual olive-toned complexion.

“My son, I need to speak with you,” he said, sounding agreeable and not urgent at all.

“I know sunset is when you like to take your stroll, and tonight’s is an ideal one, if ever there was one. But I have a task I must ask of you.”

“Well, tonight, in the village, is when they have their bible study class. I’m afraid the monk that usually visits them has come down sick, or so he says.”

“Do you think he’s faking being sick?”

“Regardless of what I think, we need to bring the Lord’s light to those who blindly stumble along in the darkness, and so I must ask you to proceed to the village this evening and give the weekly class. Would you mind terribly, my lad?”

“Not at all, Father,” I said agreeably. “Except, are there no other monks to send? After all, I am only a blacksmith, not a monk.”

“My son, to hear you speak, you can teach a bible study better than I could. What do you say?”

“I have not been in the village since I first came to the monastery. I would love a chance to see it for the first time.”

“There’s a good lad,” said Father Ferrari, clapping me on the shoulder. “Take one of the horses and proceed to the village right away. I believe you’ll just be able to make it.”

“At once, Father.” I went to the workshop, collected my Bible, and proceeded to the stable to get one of the horses.

In no time at all I was headed to the village.

My poor horse was rather out of breath by the time I arrived at the small school, on the far side of the village from the monastery. I had ridden right past the village, along the beach, and arrived at the school if not on time, then only a minute or two late. By this time night had fully fallen, and, just as I had anticipated, the stars that evening were truly a sight to behold.

But once again, I looked away from my contemplation of the night sky and turned my attention to the tiny schoolhouse instead, as I brought my sturdy beast to a halt and swung down from the saddle.

Like many buildings in the village, it was built quite plainly, of wood and stone. The building was one story, and one room, for that matter, for that was all the village needed. The school bell was oddly silent. Built in an arch overhanging the entrance, it had a long rope hanging down, enabling even a short person to easily ring the bell, calling children to school or parents to church.

Nobody was ringing the bell. Hmmm.

But there wasn’t a soul around.

Also, the night was entirely too quiet. The evening breezes were the only sound to be heard, besides the Mediterranean. No crickets chirping. No owls hooting, from the trees nearby.

There were, in short, none of the usual night sounds.

And my poor horse was fidgeting. He was shifting on his hooves, making quiet but anxious neighing noises, tossing his head.