Harry Reynolds spends his days working the family ranch dreaming of the chance to break out on his own and live up to his father Dutch's celebrated rodeo cowboy status. When his chance comes, Harry leaves everything he knows, risking the wrath of his father to find his own success.

Dreams don't come easy, but supported by the love of his best friend Reb, Harry sets out to find glory and gets a few surprises along the way. Coming of age amid sultry cowboys, huge egos, and wild horses isn't going to be easy, but Harry Reynolds is Dutch's Boy. 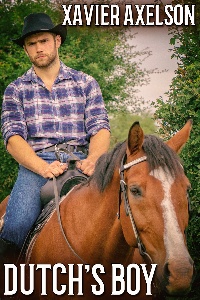 Blake's eyes were deep gray, like river rock, cold and appraising. This was a man who likely had seen a lot and wasn't afraid to take advantage, if only for his own survival.

"You bring a gun with you, Harry?"

Harry drained his beer before responding. He had been trying not to look directly at Blake, but that familiar twinge between his legs was making it harder to look away. Blake was not a bad looking guy; his eyes sparkled when he smiled, not unlike a snake, Harry thought suddenly. Blake's skin was tanned, weathered. He had worked long and hard in the sun, Harry guessed, and when Blake smiled -- which was often -- Harry noticed the lines that formed by his eyes and the corners of his mouth. Harry thought of Reb and the dream then. This wasn't Reb but Harry wasn't sure he would ever see Reb again, and he was alone.

"Cuz I asked you if you brought a gun with you and you're just staring at me like you're mute or something." Blake scratched his stubbly cheek and took a final swig of his beer, his gaze still searching Harry.

"Yeah, um, yeah, I brought something with me. They took it, though. Guess I ain't as clever as you." Harry nodded toward Blake's waist.

Blake looked down to where his gun was secured. "You wanna see it?"

Harry tried to look anywhere but where the gun was, but he got the feeling that Blake didn't miss Harry's appraising of not only the gun but his crotch and the flash of his bare stomach.

Blake took the gun from his pants. "Hold on." Harry watched as he leaned his head from the compartment again, checking to see if anyone was walking about and, once satisfied, turned back to Harry and handed the piece over to him. Harry took it uncertainly. "It's cool, cowboy. Go ahead and check it out. The coast is clear."

Harry admired the gun. The handle was bone. It felt so light in his hands that he thought for one ridiculous moment that it might be a fake. Harry caught Blake looking at him, a smile playing at the corner of his lips.

"What do you think?" Blake's voice was suddenly husky and Harry could smell his sweat -- strong and musky, masculine and familiar, like Reb's, like the horses back home.

Harry offered the gun back to its owner but was surprised to feel Blake's hands on his, the gun cold and glittering in the late afternoon sun.

"Let's get down to business, cowboy. You been staring at me like you want something and I think I know what it is." Blake leaned in closer so that barrel of the gun was pressing into his gut, his mouth was close to Harry's ear. "This heat ... It makes a man want certain things." His tongue met the side of Harry's face. "Bet you've heard that before."

Harry tried to pull away and ignore his stiffening dick He felt suddenly out of control, overwhelmed by Blake's almost threatening sensuality.

"I bet you've never had a cock in your mouth, have you, cowboy? Never had a man put his hard prick right in that sweet little mouth?" Blake pushed himself harder against the gun. "Bet you'd let me do it, wouldn't you?"

Harry nodded against Blake's neck. He could feel the other man's pulse throbbing, could feel the heat rising between their bodies. The gun was getting slippery. "Let me move the gun." Harry tried to move but Blake held his hand.

"Unbutton my shirt, cowboy." Blake whispered the command into Harry's ear then flicked his tongue against Harry's earlobe. "See what happens when it's hot like this?"