When a red kitten claws its way up her gown while she’s out gathering wood, Emer Drumwiddy knows her true love will come to her in eight years’ time. It seems a long time to wait, as she’s already twenty-two. Living alone since her mother married a leprechaun man from far-off Erin a’ Fee, Emer is happy to adopt Red for company. She just doesn’t bargain on getting Rory as well.

Rory is an orphan, and he loves Emer from the first time he sees her. As he grows to manhood, he begins to love her in a different way.

Emer is fond of her wee laddie, but the eight years are nearly up. What will Rory do when her true love comes to claim her? 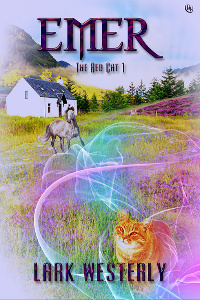 More From The Red Cat

December 1944, The Pixie Forest, Over There

Emer Drumwiddy looked down at the small creature clinging to her skirts. She wore good braeside wool, so the rose-prickle claws would do no harm to her clothing. She was less confident about her skin.

The kitten yowled and stared up at her with wide, amber eyes.

“I wondered when you’d show up, wee mannie.” Her voice sounded oddly calm to her, but then…how could she feel excited about something eight years in her future?

She bent and unhooked the kitten’s claws from her skirt before she lifted it to eye-level.

Its eyes widened, and its pink mouth opened in silent appeal.

Emer brought the ginger scrap to her breast and rested it against her bosom. “What am I to do with you, now you’ve come?”

The kitten snuggled in and implied it had some ideas, possibly involving a warm place to sleep and a lap for comfortable kneading.

Emer adjusted her shawl, conjuring it into a sling. The kitten purred, rubbing its whiskered cheek against the swell of her breast.

Emer blinked, startled by the caress, if that was what it was. She’d known the red kitten would come to her someday, but until then it had been a concept, not a solid little mass of fur and purr.

She bent to gather an armful of broken branches from the undergrowth where she’d dropped it when the kitten leapt from wherever it had been hiding to swing from her skirt.

She chuckled and walked on over the brae and down into the glen and then to the pixie forest and along to the edge of the green way.

Her mother’s furniture was still there, and so were some of her gowns of braeside wool. Sometimes when Emer went to visit she’d note a gown missing, or a treasured piece of crockery no longer on the dresser. In the early days, there had often been notes waiting there for her to find.

Darling Emer…they’d begin, and they’d end with all our love until the Lord sees fit for us to meet again.

Emer never wrote back. How could she? It was enough to know Dornie was well and happy.

She opened the swinging gate and let herself into her garden. It was a young planting. The pinecone she’d set by the gate had lately put up a hopeful spike of green. The flower beds had ankle-deep plants. She wanted them higher, knee deep and thigh deep. She was greedy for the bees to hum in waist-high lavender.

“Everything to its time,” she said aloud. She had got into the habit of talking to herself, in the time she’d been living alone.

She entered the cottage and sniffed the scent of new timber. Her friend, Catriona Mcdonald Chaucer, had helped her with some of the work, and so had Cat’s cheery band of brothers and cousins, all fine braefolk men with heathered eyes and rough thatches of hair ranging from black to almost blond. When the work was done, the men had all crowded into the kitchen and stood in a circle, backs to the walls, arms folded over broad chests, all smiling at her.

“Aye?” She’d looked them over with a lifted brow.

Cat, hand-in-hand with her new husband, Humphrey Chaucer, said mischievously, “They’re waiting for you to pick one o’ them, hen.”

The men all nodded solemnly. Emer thought they were amused, but also willing to play along.

“I’ve a kiss o’ friendship for you all, but no more than that,” she said.

They sighed in unison.

“I never promised anything else.”

The man to her right, whose name was Douglas Mcdonald, held out his arms. She went to kiss him. He gave her a hug. “Bless you, lassie, I’d have liked it fine if you could ha’ chosen me,” he said in her ear, and he handed her on to his brother, Callum.

Round the kitchen she went, kissing, hugging and thanking Mcdonalds, Gordons, MacHeathers and an Irving. They were all fine laddies, braw, fit, kind and loving. They smelled of furze and heather, rain and barley.

“Any lassie who takes one of you for her man will be blessed among women,” she said to them all.

“So why not you, Emer?” Cat sounded disappointed. Emer knew Cat had hoped they might become sisters or cousins-by-love at the least.

She fed them scones, and they played their pipes to warm the cottage. Then they all bade her farewell and ranged off home.

Emer sighed. One day she’d find the love of her life. The sight told her that. It didn’t show her his face or form. Instead, it persisted in showing her a red kitten.

He’ll come to ye first…the lover will be eight summers on.

Emer was twenty-one. It seemed a long time to wait, especially when she’d just closed the door on a dozen handsome men.

The sight had come through the Drumwiddy line. Her father’s grandmother, who had wed her cousin, was said to have held it strongly. It had touched Emer in childhood, and her young mother, although not having it herself, had always treated it with respect.

And sometimes, Emer thought, in the quiet after her housewarming, it could be an unmitigated nuisance.