Emilia has tried to quit her addiction to oxycodone and alcohol many times before, but has never lasted more than a day. Now she’s been off them for three days, but her body is in rebellion and her withdrawal symptoms are about to drive her back. She knows she must do something different this time and goes to a SMART Recovery meeting.

Even in her state of withdrawal, she’s drawn to the tall handsome Mosi, who runs the meeting. But a man like him could never look at a woman like her. Could he?

This is her story. Her successes and failures on her road to a new life. Even as she struggles to remain clean and sober, a strange artifact from the ancient past of her people drags her unwillingly into provincial politics. Can she maintain abstinence through it all? Will her hopes be dashed…again? Or will she finally find healing from her addictions and the hope of genuine love? 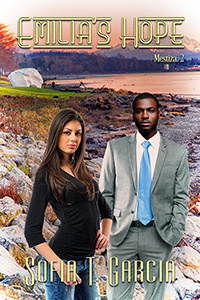 Emilia hauled open the stiff self-closing door with a struggle and ground to a halt on the threshold. The room was dim, which suited both her mood and the pounding inside of her skull. Should I even be here? Can this really help? Maybe I’m lost for good. This is scary as hell. Should I go in or get the hell out of here? Yep, I’m gone!

Even as that thought ran through her mind, the heavy glass door banged into her butt with enough force to propel her weak body eighteen inches further into the room. By some minor miracle she remained on her feet, though she wobbled where she stood.

A face appeared before her, looking deep into her eyes, and a warm hand was placed under her arm.

“Are you okay?” a stranger asked.

“Not really,” she answered with atypical candor.

“I think you need to sit down,” he said and took her elbow.

Without inquiring what she wanted, he guided her to a table and the nearest empty chair, with a gentleness to which she was unaccustomed. When she didn’t sit down, that same warm hand which in that moment, seemed to be approximately the size of a subcompact car, pressed down on her shoulder. It wasn’t hard or forceful, but in her weak state she couldn’t withstand the soft push and thumped onto the chair. The stranger gave her a brilliantly white smile, left her side, and went to sit down.

They’re laughing and chatting, but it doesn’t seem like they’re laughing at me. How could they be so happy? I’m scared and shaking and they’re enjoying themselves. Is there something here for me?

Emilia looked around, now that she could see in the dimness.

Very informal. Two tables pushed together, long edge to long edge. She reached down and touched the chair she sat in. Comfy. Not a recliner, but comfortable. How many people are here anyway? I could count them, which at least would distract me from my shaking hands.

One, two, three, that guy looks really tall. Damn it, where was I? One, two, three, four, five, six, seven. Wow, her hair is totally pink and blue. Crap! Where the hell was I …eleven, twelve, thirteen, fourteen. Fourteen, that’s it. Damn, did I count myself?

She was about to restart the tedious process of counting when the stranger who’d helped her to the seat spoke.

“Welcome everyone. It’s time to get started. I’m Mosi, your facilitator this evening. This is an open meeting of SMART Recovery. For any newcomers, SMART stands for Self- Management And Recovery Training.”

My brain’s just not working, I can’t even keep up with what he’s saying. Ah, at least I get that. It’s anonymous. I wouldn’t want the boss to know. She gave a soft sigh.

“We’re going to check in,” Mosi said. “Tell us your name and a little about how your week went. If at any time you don’t want to share, just say pass. Let’s start…here,” he said with a warm smile, pointing at the person next to him on his right.

Is it his smile that’s lighting up the room? Or the warmth and tenderness in his voice? Maybe it’s his white teeth shining out from his ebony face. Jesus Emilia, get a hold of yourself. Though she was born and raised on the west coast, just outside of Vancouver British Columbia, and there were people of every ethnicity imaginable, she’d never seen a person with skin as black as Mosi’s.

The man Mosi had pointed to spoke, and Emilia tore her gaze from his ebony face to look at him.

The place broke out into clapping and there were congratulations from several around the table. Josh smiled and continued.

“It’s been a great week, a lot better than last week when my car was broken into. I’d chosen the minimum deductible, which I wouldn’t have done when I was using. Mostly because I’d have been too broke. My car’s fixed and my wife and I are doing well. I was a lucky guy that she stuck with me and I’m trying to make up for all the lost time I missed with her and the kids. She’s happy, the kids are happy and most of all, I’m happy.”

“Thanks, Josh,” Mosi said and nodded to the woman beside him.

Emilia sat straight and listened wide-eyed to the middle-aged woman in disbelief. Every word about the lady’s past sounds virtually identical to what I’m going through. How can I feel encouraged and terrified at the same time? God, my body’s shaking and the cravings are overwhelming my head. I have to super focus on what Caryn is saying.

She tried not to listen as her addiction tried to persuade her. Just one more time. You can quit tomorrow. You’re not really addicted, you can quit anytime you want.

Except I can’t, not on my own, I’ve already tried many, many times and failed.

Emilia didn’t hear much after that and before she realized it, Mosi said to her with a nod, “Go ahead, we’ve all been where you are today.” He gave her a smile.

Trying to shake the thick cobwebs from her head, she began.

“Uh—I’m Emilia and I’m addicted to alcohol and oxycodone. I haven’t done any in three days and I’m trying to quit. I’ve tried a bunch of times before, but always went back. It’s destroying my life and I have to stop, but I just can’t do it on my own.”