Athen “Blackeye” Mavromatis, roving lieutenant with the Beverly Hills Police Department, is trying to enjoy a rare day off. It doesn’t look like it’s going to happen when the mayor hands him a twisty missing person’s case. A Saudi Princess has vanished. Because of royal protocols, Athen must conduct his investigation under the wire. He doesn’t mind doing that, but it soon becomes apparent that the princess, who’s also a wannabe actress, might have been murdered. Her apartment appears to be one big giant crime scene.

But just who is Natasha Al-Khan, AKA Natasha King, and who wants her dead? Though Beverly Hills has the reputation of being crime-free, this is the second murder case he’s tackled in the short time Athen’s been with the department. Not only does he have to solve this one fast, but he and his lover, Grady, are dealing with Athen’s delinquent niece who’s just come out to them. Oh, and somebody very near and dear to them may turn out to be a deranged psychopath… 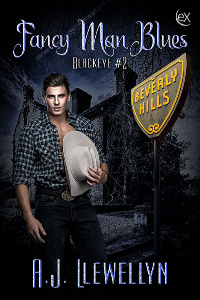 Unknown Number. Normally, Athen ignored calls like that because they were telemarketers or scams. But he was a cop. He couldn’t ignore calls, especially when they kept calling back. Two-forty a.m. Who the hell could it be? His cellphone crackled.

Athen squinted as the voice from his distant past interrupted his, er, uptown funk. He finally had his lover, Grady, right where he wanted him, naked and in bed, the house dark and silent.

Charlie Cricket Pritchard chuckled. “You still got that thing for me, eh?”

Athen rolled his eyes but couldn’t resist laughing, too. “Oh, yeah. I got sleepless nights over you.”

Grady sat up in bed. “Who the hell are you talking to?”

Athen held up a finger. Grady’s eyes hardened in a way that Athen knew would mean he had a lot of ’splaining to do. The truth was, he’d missed Cricket, his old partner. Athen thought he’d retired. Why was he calling now?

Cricket coughed. He was still smoking, by the sounds of it. “Listen. We need to talk.”

Athen reached out a languid hand and stroked Grady’s belly. Grady stiffened, shoving his hand aside and rolled away from him. Ouch.

“I’d say now, except it’s not a good idea. I’m on surveillance. Can we talk tomorrow? Can you meet me?”

“I’ll let you know. Sleep tight. Nighty-night. Keep this on the QT.” Cricket ended their call.

“Whatever,” Athen said, even though Cricket was gone, and Grady had his back to him.

“Who the hell’s Cricket?” Grady asked, not turning to look at him.

Huh. Grady hasn’t forgiven Cricket. Grady had come into his life just as Charlie was being ordered to bedrest after a quadruple bypass.

Athen stared at Grady’s barely visible back. “Apparently not.”

“Hmph.” Grady leaned farther away. “You can thank that old coot for my iffy stiffy.”

Athen lay back against the pillows. The chill between them frustrated him. He was as loyal as they came. He hadn’t had a decent, active case for a month, and at the first sign of something brewing…

Grady’s soft snoring told him everything he needed to know. Athen might not have much on his plate, but Grady had to be exhausted. He was working on a huge TV show and handling Athen’s thirteen-year-old niece, Despina. She was closer to being shipped off to boarding school than she probably realized.

Athen loved sex. So did Grady. And Athen loved sex with Grady. Despina did her best to come between them, and now, it seemed, so did Cricket. Athen felt like the guy on the State Farm TV ad whose wife catches him in a late-night phone conversation with Jake, a security specialist and doesn’t believe him.

Huh. Cricket, like Jake from State Farm, wears khakis. At least he did. Wonder what the hell he wants from me? Thoughts paddled around his brain. Memories of the last case he and Cricket had worked on still rankled. He tried to push the upsetting thoughts from his mind. And then, sleep claimed him…