Demonologist Luke Melloy has seen the face of pure evil. He’s fought it and sent it back to hell. It’s what he does. To Claire Westin, ghosts and demons are just great television and good for ratings. When she’s faced with the truth Luke has seen, her reality is turned upside down as the two are swept into dire straits moments after they meet. Desire sparks between the unlikely pair, throwing their hearts into chaos with a love neither of them expected nor wanted.

When the Demon targets an unsuspecting Claire with his wrath, Luke finds his focus split between his oath to God and the awakening of his heart. Together, can they face the ancient evil and defeat it, or will they lose everything? 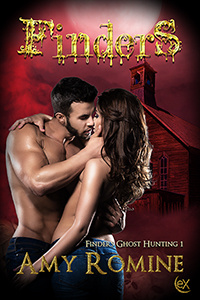 The hot sun beat down on television producer Claire Westin’s bare shoulders. A cloudless sky and a soft breeze accompanied her on a walk through the fields behind her house in Claremore, Oklahoma.

Her dog, Pip, ran free in and out of the brush chasing crickets and barking at turtles. This was her place of solace and calm. With her cell phone turned off, she let go of the hectic rhythm of her life, basking in the music of nature. She followed the neatly mowed path, knowing the steps by heart, walking along with her mind blank and calm. Suddenly the music stopped. Silence. Hearing the rattle of a snake, she turned to her left and called out to her dog.

Something shadowed the sun. Her eyes traveled over the empty field to the source of the shadow. A hooded figure stood tall against the light of the sun. Her body froze in place. Then the air evaporated, followed by blackness

“From the devil reigning over the souls of the damned, to the famed self-portrait from the Codex Gigas, the trickery, the promises, the feelings of desire, and euphoria are all methods of seduction. A Demon’s goal is to make you believe something is missing and they have whatever you need to fill the gap in your life. Salvation, more time, love, money, power—whatever your deepest desire, the Demon will discover it and use it against you. It’s a carrot on a string, pulling you further and further down the path until there is no way back.

“Now, if you think this is all some blatant flirtation, it’s not. The seduction or infestation is very subtle. This persuasion, for lack of a better term, takes place in your subconscious, feeding you the lies and the promises in the white noise you are not consciously hearing.”

Luke’s students—most of them—clung to every word. As a tenured Professor of Demonology, he taught a specialized class at the Catholic Seminaries across the country. This semester he found himself in Lander, WY. He personally chose his students based on rigorous testing and one-on-one interviews. To delve into the depths of theological lore of a very dark nature, his students had to be of a particular mindset to attend his class.

“There’s a famous quote by a scholar of sorts. The biggest trick the devil ever pulled was convincing the world he doesn’t exist. There’s truth in the statement. Millions don’t believe in hell, demons, or the devil. Even more, believe in nothing at all. Tell me, who is the easiest to sway? A person with faith−whether it be faith in a Higher Power or faith in each other or basic humanity−or a person who has no faith in anything at all?”

A bell rang, and the lights turned on. “Think about it. The assignment is fifteen-hundred words by Tuesday. Enjoy the day.”

As he packed up his desk, a familiar face appeared from the crowd, approaching the front of the auditorium. Luke extended his hand to his longtime friend, Grant Henley. “Grant, I was just packing up to go meet you.”

Standing six-foot-five, with broad shoulders, a shaved head and a neatly trimmed goatee, Grant Henley, when judged on looks alone, was intimidating. Luke knew better, having worked with Grant intermittently over the years. He’d never met a more empathetic, generous, and kind man in his life. When Grant and Finders, his ghost hunting team, came across a case of the demonic plaguing innocents, he called Luke, a professionally experienced demonologist, to intervene.

“I admit I left a little early to catch your lecture. Enthralling, as always.”

“Enthralling is a little much, but I try to keep my students’ attention.”

“How many of them know about your firsthand experience with these afflictions?”

“All of them. I’m upfront and honest about all of my dealings. I use case files as examples. It’s the only way to make them aware of the reality. Theory and lore can only go so far.”

“How does the Council feel about your transparency?”

Luke knew how Grant had, on many occasions, been forced to experience the bureaucracy of the Catholic Council firsthand when it came to assisting innocents being tortured by demonic entities. It was not easy to persuade them of anything.

Luke laughed, shoving his computer in his bag. “My teaching techniques are an ongoing debate.”

“You never wanted it easy.”

“Yeah, right,” Luke glanced down at the only remaining item on his desk. Unconsciously flinching at the headline, he tapped his fingers. Luke’s mind flashed to the sight of his friend and colleague hanging from the steeple of the Seminary.

“Sorry about Father Daniel. I saw the paper when I was getting coffee,” Grant said. “Did you two work together?”

“On occasion,” Luke said, tossing the paper in the recycle bin.

“The media presence out front is because of what happened?” Grant asked.

“The Council refuses to give the press any details. Thus, the media are looking for any stray information they can get.”

“Good thing I parked out back.”

“Not a bad idea.” Luke slung his bag over his shoulder. “What’s the latest with Finders?”

“Besides you as the newest member of the team?”

“I’m still undecided. This little excursion is a trial run.”

“Understood. Have you been watching the show?”

“When I have the time. I’ll admit I’m a little behind, but I assume it’s not much different from when there are no cameras. Just fewer people and lighting.”