First, We Kill All the Lawyers

Someone is killing lawyers, but a particular vampire lawyer won’t stay dead.

Donovan Trait is a marked man. He is flamboyant, stunningly handsome, and notoriously insatiable, but his attitude and style belie his skills in the courtroom. No one survives a cross-examination at Donovan’s hands. His knowledge of the law and trial practice has accumulated over the years… and years, of experience. More than three hundred years. You see, when Donovan isn’t seducing judges and juries, he’s a creature of the night. And now that someone has decided that it’s time to kill all lawyers, his lust for attention has set him in the murderer’s sights.

The problem is that vampires don’t die. Not easily, anyway. That’s good news for Donovan, not so much for his very human lady love, also a target of the serial killer. Will several unsuccessful attempts on his life expose Donovan’s true nature? Will the killer learn the secret that will guarantee a permanent death? Or will Donovan finally manage to put an end to the killer’s murderous spree and live happily ever after, with his lady love? 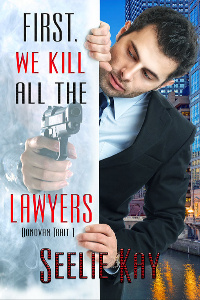 First, We Kill All the Lawyers

First, We Kill All the Lawyers
Seelie Kay
In Shelf
$4.99 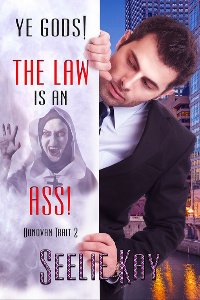 Donovan Trait whipped off his designer trench coat and, with a quick smile at the judge, neatly draped it over the bar separating the gallery from the court.

He adjusted his cuffs, smoothed his suit coat, and tweaked a crease in his slacks. Then his lips curled up into a grin. “My apologies, Your Honor,” he said with his classic aristocratic flair, just a hint of a British accent clipping his vowels. “The elevated commuter train was held up by some unfathomable crisis.” He shrugged. “I thought that would get me across town faster than a cab, but once again, I was proved wrong. I’ve been on trains across the Midwest, delayed by cows or sheep, even the occasional misguided commuter, but the El just leaves me flummoxed. It seems to stop whenever, for only God knows whatever reason.” Donovan brushed a lock of hair off his forehead and smirked. “My paralegal calls them El-Farts.”

Those in the courtroom chuckled. The judge, however, scowled. Shirley Magnusen narrowed her clear blue eyes and pointed her gavel at Donovan. “Why do I think you were late because you were forced to tear yourself away from the arms of some blonde bimbo providing you with afternoon delights?” Her stern gaze swept his body. Then she chuckled and shook her head. She patted her blonde hair, pulled back into a neat bun, and her ruby red lips rewarded him with a sly smile. “Not sure why you were named one of Chicago’s most eligible bachelors. I don’t see the attraction at all, but your many trysts are no excuse for being late to court.” She pointed her gavel at him. “Don’t let it happen again.”

Donovan placed a hand over his heart. “Your Honor, you wound me. I merely got a late start this morning and I have been unable to catch up. Please be assured that I hurried to this court in great anticipation of…”

District Attorney Wallace J. Sullivan cleared his throat. “Your Honor, must the rest of us be subjected to this bull…um, malarkey? Unlike defense counsel, I take my job seriously, and I would like to proceed. I have defendants to hang, witnesses to fry.” He chuckled. “And I so enjoy inflicting my legal prowess on Attorney Trait.” He plucked at the arm of his suit coat as if removing a piece of lint, a smile blooming on his face. “Like taking candy from a baby.”

Judge Magnusen nodded. “Alright. Let’s begin.” She gestured to Donovan. “Counselor Trait. I believe you have a motion or two?”

Donovan winked at her. “Of course, I do, Your Honor. Where would you like to begin?”

The judge rolled her eyes. “At the beginning, Counselor. Now get on with it. Unlike the El, this court has a schedule, and we stick to it.”

Donovan bowed his head in deference. “Of course, Your Honor.” He pulled a legal pad from his briefcase and studied it for a moment. Then he gazed at the judge, a slight smile crossing his face. “Your Honor, I move for a complete dismissal of the charges against my client. With prejudice, of course.”

Judge Magnusen frowned. “On what grounds?”

Donovan shook his head, trying to appear dismayed. “Sadly, Your Honor, on the grounds of illegal search and seizure. A violation of the Fourth Amendment to the U.S. Constitution and Article I, Section Six of the Illinois State Constitution, which states…”

The judge waved her hand. “I know what it says, Counselor. Let’s get down to the nitty-gritty.”

“Of course, Your Honor. The police had no arrest or search warrant when they broke down my client’s door. They didn’t even have probable cause to enter. Their entire conversation before entering the premises revolved around whether their search warrant would come through in time to conduct a legal search. They also failed to knock and announce before entering. Instead, they just barged in and seized everything they could find.”

The D.A. huffed and muttered, “He’s making that up.”

Donovan went back to his briefcase and pulled out a rectangular device. He held it up for the judge to see. “It was all recorded on my client’s doorbell, Your Honor. This little doorbell has sound and sight capabilities. I believe it is called A Ring. My client called me while the police were discussing their options. I advised him to let them implicate themselves. I also told him to demand a warrant, and when they couldn’t produce one, to deny them entry.”

Sullivan jumped to his feet. “Your Honor, we were not made aware of this evidence.” In a haughty tone, he added. “Besides, you cannot record people without their permission. That evidence is inadmissible.”

The judge scowled and peered over her reading glasses at the District Attorney. “Nice try, Wally. Security tapes used to prove or disprove an alleged crime are always admissible and you know it. Now let the counselor proceed.”

“Thank you, Your Honor.” Donovan approached the bench and handed the judge a document. “As this transcript reveals, the police knew they were entering illegally.” He walked over to Sullivan and tossed a copy to him. “Then the District Attorney attempted to cover their blunder by claiming the evidence they seized was in plain sight, rendering the seizure legal.” Donovan turned toward the judge and scratched his head. “I don’t know where our esteemed D.A. studied law, but at Harvard, we were taught that an illegal entry makes anything seized thereafter the fruit of the poisonous tree.

“Which means, of course, that all the evidence used to arrest and indict my client was inadmissible. And that means none of the resulting charges can stand.

“I respectfully request dismissal of all charges against my client, with prejudice.” Donovan gazed at the District Attorney, his expression stern. “I also ask that all evidence seized illegally be returned to my client forthwith.” Donovan removed another sheet of paper from his briefcase. “My client’s wife recorded every single item seized. Not only did she manually maintain an inventory, but it was also verified with an in-home security camera. We will consider any cash or valuables missing from that inventory to have been the subject of theft, at the hands of the police or the D.A.’s office.” He handed the list to the judge and smirked. “My client will not stand for sticky fingers, Your Honor. He will sue for a full recovery.”