Last Christmas, Francis had a promising acting career and a budding romance with Duncan. This Christmas, it seems he's lost it all.

When his mum persuades him to help her with the annual village production, he's drawn back into the wacky world of amateur pantomime. This year's production has all kind of new twists, the village players are eccentric although enthusiastic, and Francis isn't sure he ever saw himself as a director. And what his mother also didn't tell him was, he'd be working with Duncan by his side.

But if he can cope with charity shop costumes, squabbling characters, cross-dressing, and all the corny jokes, can he also believe in the show's magical triumph of Good over Bad, and win a second chance with Duncan? After all, in pantomime, everyone gets their wish granted in the end.

"Thank you, Errol," Mum called from our seats, smiling at the elderly harmonica player on the stage. "We'll be in touch!"

Errol hacked a cough and grinned, showing alternate teeth missing in the front. "I'll get me people to talk to y'r people, shall I, Rose?"

"Why's he wearing a full Santa suit?" I hissed to her as Errol shuffled off stage.

"He likes it," she said blithely. "Keeps him warm."

Errol always played the music in the handover between scenes. I mean, always. Every year. No need for a casting session at all. But I'd learned over the years that the villagers enjoyed the auditions as much as the production. It was a treasured part of the show.

"What show is this, actually?" I peered at the odd collection of roles listed on my script. "It looks like the basic cast from Cinderella, but you've got all sorts of other characters added in. I can see a horse here, a pirate, and is that an elf --?"

She waved a hand in front of my face, temporarily obscuring my view of the names. "Heavens, I hope you haven't brought more of those bourgeois ideas back with you from London! We're not working on one particular tale this year."

"We thought things were getting a bit stale. I'm using characters from a couple of other shows. And, of course, it depends what costumes I can lay my hands on."

I blinked. The Christmas panto was always on the bizarre if well-loved side, but this was taking it to a new level. I wondered who the elusive "we" was she kept referring to.

"Hi Rose," called a slim teenaged girl from the stage.

"Francis," I said automatically. No one called me Frank except for ... well, anyway, no one called me that. I peered between the girls. Yes, a genuine spitting image. And no, I still couldn't tell the difference between the Cartwright twins.

"What parts are you reading for?" I asked.

I glanced at Mum and mouthed "pirate, single?"

"They won't act apart from each other," she said happily. "So I said they could share. And then there's no problem with needing an understudy."

"He's behind you!" came a sudden growl.

I whirled around in my chair and nearly burned my nose on the tea urn Errol had wheeled dangerously close on a battered old hostess trolley.

Yes, Errol had done the refreshments every year, too. I shifted my chair another foot away from the urn -- which was rumbling ominously like a Vesuvius wondering whether to erupt or settle back with passing indigestion to watch a boxset -- and accepted an "I love spreadsheets" mug of surprisingly good tea. Mum got "I love Rottweilers" though I wasn't aware anyone in the village had ever had one.

The casting continued in the same, wacky vein. Not just the usual, traditional cross-gender casting I'd grown to know and love in pantomime. But this year, it seemed everything was up for grabs. Marco, the cute young man who'd recently taken over the charity shop, lithe and graceful and with a selection of neck shawls in eye-watering-neon wools, was so desperate to play the Evil Stepmother he'd come dressed in a Margaret Thatcher-type skirt suit. Well, maybe he wore similar every day and I hadn't noticed. He certainly rocked it.

The Ugly Sisters were auditioned for by Arnold from the Post Office and his cousin Reg, who worked on a local stud farm. Both were in their mid-fifties, both strong, stocky, working men, both half-bald. They read a page of the script in booming voices, with four of Reg's children clapping wildly from the back of the hall. I couldn't help noticing that Marco now stood with them, sidled up beside the eldest boy, who was probably in his late twenties and built like a prop forward. The heated glances they were exchanging implied entertainment of a rather different kind.

On the stage, the Sisters were ad-libbing banter that would have to be strongly censored before appearing in a family show, and grinning like school kids every time there was mention of bosoms.

"They love RuPaul's show," Mum murmured as she added their names to the cast list. "But we'll have to manage their costume expectations downwards."

I smiled. I was enjoying this more than I'd thought. I turned around to fetch another cuppa, and found Miranda sitting behind us, knitting as always. The almost eighty-year-old grandmother to the twins, she still cycled everywhere around the village, ran a weekly spin class, and always had a packet of biscuits in her knitting bag. A widow, there was even a rumour she and Errol were having an affair. No reason to keep it quiet -- they were both single -- but I think they liked the illusion of illicitness. The wool she was using was a lurid orange. I wondered if she knitted Marco's shawls for him.

"Francis." She nodded at me, winked, then rummaged in her bag and found me a half-open pack of custard creams. I returned the wink in gratitude and settled back to my new job. 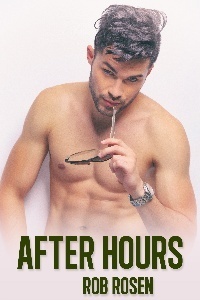