Jimmy McSwain is a New York City private detective, operating out of Hell’s Kitchen, the rough and tumble Manhattan neighborhood he grew up in. At fourteen, he watched as his NYPD father was gunned down.

Now twenty-eight, Jimmy has never given up his pursuit of whoever killed Joseph McSwain. But a PI must make a living, too, so he’s taken on the case of missing heir Harris Rothschild, whose overbearing father doesn’t approve of his “alternate” lifestyle. Tracking down Harris is easier than expected, finding him at a club called the Dress-Up. But the carnage that follows after he’s found creates new problems.

With a shocking fresh murder on his hands, and a threat coming from some unforeseen person, Jimmy’s caseload is suddenly full, and as dangerous as the streets he knows all too well. Good thing he has his family to fall back on, and a potential new love interest. 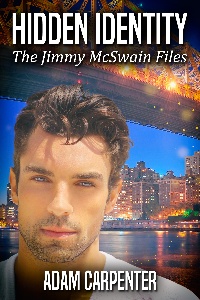 More From The Jimmy McSwain Files

“I’m here to see a Mr. Rothschild,” Jimmy said as the front doors were opened for him. “I believe he’s expecting me.”

This was the part of the job Jimmy hated, coming up to these gilded addresses, sounding so street when he stated his name. His parents hadn’t named him the more formal James, they’d gone with Jimmy from the start, his birth certificate proof. They never intended to call him anything but Jimmy, or Jim sometimes; so in fact, his legal name was Jimmy Joseph McSwain, and if you added in his confirmation name, he was Jimmy Joseph Byrne McSwain. Byrne was his mother’s maiden name and his choosing it had not only pleased Maggie, it had brought a wistful smile to his maternal grandmother, Nora, as well. When it came to introducing himself in such rarefied worlds such as the “Corinthian,” the informal Jimmy sounded inadequate.

A quick phone call confirmed his appointment, and soon he was hurtling up to the twenty fourth floor, the penthouse suite, where the elevator opened directly into the duplex apartment. A man stood at ramrod attention, his white hair neatly trimmed, a matching goatee equally neat. He could have been the butler, but he also could have been Rothschild. He decided to wait until the man introduced himself.

The two men shook, the grip strong, Jimmy being led into the apartment at the same time.

He didn’t know much about designers or fabrics, all he knew was that this place looked nice, like one of those over-decorated hotel suites found in five-star resorts. Classic elegance, smelling of money, Jimmy reminded himself to thank Mallory for not just the opportunity but for suggesting he dress well for the luncheon. How would a man like Rothschild take Jimmy seriously if he’d shown up in his usual uniform of jeans and whatever casual shirt hasn’t hit the laundry pile yet? He’d even shaved, so he was fresh looking for once. He almost beamed with pride.

“Not exactly what I expected,” Rothschild said.

“With that tie nearly strangling you, you look more like you just stepped out of a fashion magazine,” he said, “Although the photographer forgot to airbrush the bridge of your nose. Am I to assume the other guy looks worse?”

Why did everyone go for the obvious joke? What was he supposed to say, no?

Fortunately, he was spared from answering, as the two men were interrupted by the arrival of two more women, one of them his sister Mallory, looking as stylish as ever. She’d come a long way from the braces and gawky limbs she’d endured as a teenager. Jimmy knew she worked hard at her neighborhood makeover and sometimes it looked like she’d never even heard of Hell’s Kitchen, must less having grown up there. She lessened the tough girl accent, coming out only when forced. In certain social circles, she probably called Clinton home.

“Jimmy, thanks for coming,” Mallory said, embracing him.

The other woman grimaced, as though the mere presence of a private investigator inside her elegant home was somehow soiling it. Should he have wiped his feet before walking onto their plush white carpet? No doubt the lady of the house, she wore a thick helmet of blonde hair and her age fell somewhere between Mallory’s thirty-one years and Saul Rothschild’s seasoned age. Surgery might have tipped the scales Mallory’s way.

She smiled, her mouth barely moving, as though she’d heard that a thousand times.

“Mr. McSwain, thank you for coming. Shall we sit down to dine? I’m famished.”

She was also razor thin and Jimmy figured she might be full just by breathing in the smell of food. But he wasn’t here to judge, he was here for a job, and now that he was here and in the company of this seemingly typical upscale couple, he was curious why they needed his particular brand of services. As they were led into a dining room where four place settings awaited them, Jimmy exchanged a look at Mallory, but her face gave nothing away. She was the conduit, the connection between the mean streets and the gilded skyscrapers. It was only her responsibility to get him here, not to fill him in on what was at stake.

Their hostess directed them to seats, and in no time a server appeared, carrying a china soup tureen. The servant ladled four bowls before departing, leaving the four of them to begin. Jimmy looked again at his sister, who was gently sipping at her soup, careful not to make a noise. He’d have to watch his manners here, not use his tie as a napkin.

“I trust you found the place all right?” Jellison asked.

“Six train to Seventy-seventh, then a short walk.”

Use of the word “boy” wasn’t lost on Jimmy. Was it meant to somehow demean him, put him in his place? Or maybe for a guy of Rothschild’s age, anyone below fifty qualified. Jimmy opted to concentrate on the capable part of his comment, taking it as a compliment.

Jimmy shrugged. “Jim, Jimmy, take your pick. When my mother’s been angry at me, I’ve answered to worse.”

“Jimmy it is,” Rothschild said. “Informal is always better.”