Cressida Darewood Lindquist has spent ten years putting her family before herself, and now, finally, she is able to indulge in life as a widowed viscountess. That is, until a highwayman interrupts her plans, accosting her in the dark of the night.

Deverell Havelock is done with his life of crime, ready to sail to America. He only needs one more robbery, then he can quit England forever. But he cannot forget the stubborn lady who saves his life on a midnight road to London.

When Cress’s brother is arrested, she turns to Dev, the only man who can break her brother out of prison and save the Darewood family from ruination. But does she want him to rescue her or run away with her? 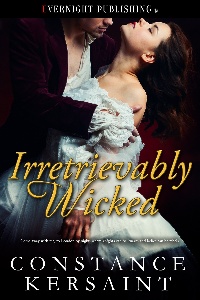 More From Rebel by Night

Dev drank his ale in quite the mood. Sometimes a drunk soul would approach him, but a few short answers would convince them they were better off seeking company elsewhere.

Years of practice had earned him the ability to drink far more than was healthy for a person. Dev stared hard at his mug of whiskey and wondered if he should switch to gin. It would kill him quicker but also numb him to all the things he wanted to escape, namely, his life.

He had not bought his passage to America yet. He meant to do it the week before and kept putting it off. First, he had to gather all his money from the different banks. Then he had to make his plans.

Remy came out to the main room and caught his attention. Frowning, Dev picked up his ale and followed his fence to the hallway behind the main room.

Before Remy could say anything, they heard voices. Agitated, loud, belligerent voices were not out of place, but the clear tones of a woman were.

A woman sparkling in fine clothes and a wig burst into the hallway, and Dev found himself staring at the woman he had been trying to drink away.

The men were momentarily dazzled by the vision of shimmering silks and pale skin, sights unexpected in Lambeth. She wore diamonds twisted up in her wig, Dev observed dazedly. What kind of world did she inhabit in which women wore diamonds in their hair?

Then Dev saw her face and stopped breathing. Cress was frantic. She was afraid.

Without conscious thought, Dev took her elbow and steered her down the hallway. Remy directed him to the snug nearest to the kitchen, a small room that was too small to be an office and too big to be a closet. Dev snagged a candle before closing the door behind him.

He sat her down without a word at the small table and lit a taper, lighting the small chamber.

Without touching her, Dev pushed the mug into Cress’s limp hands. He watched her come back to awareness and curl her fingers around the coffee. The first taste of the bitter brew seemed to bring her back from wherever she was.

The faint light of the candle illuminated her fine white wig and the jewels she still wore.

Her face seemed different, aside from the despair. She wore powder and a beauty patch on her left cheek. She needed neither.

Why couldn’t he see her face in the sun, during the day? Just once. Was even that small favor beyond his reach?

“My lady,” Dev said quietly, “what an overwhelming delight. To what do I owe this pleasure?” You wanted to see me, Dev silently urged her to say. You couldn’t forget me. I haunted your thoughts the way you haunted mine.

Cress straightened her posture, and only then did Dev see something familiar. This was the woman who rescued him from certain death. Twice.

Dev blinked and had a brief, wild fantasy of being her hired lover, a male courtesan. The idea had a great deal of appeal.

“A bit of rantum-scantum is one thing, but this sounds much more serious,” he said, keeping his tone light.

“I need you to break my brother out of prison,” Cress said, evenly and calmly, as if she was telling him the coffee was cold.

“I don’t know. He was just arrested earlier tonight in St. Giles under the name Jack O’Dare. He didn’t give his real name.”

Remy had contacts within the police. Once they had a location, they could figure out who to bribe, what paperwork to forge, not that the paperwork needed to be sterling.

What was he thinking? He needed to focus on the ship schedule for the morrow, not rescuing damsels in distress, especially not aristocratic ones, which Cress now very obviously was.

“There is not a prison in this country you could not buy a man out of, my lady,” Dev pointed out, making his voice hard. She was one of them. She was of a different class. Nothing good ever came from dealing with that world.

“I can’t bribe him out of prison without ruining my family name,” Cress said. “I don’t even know which prison he’s in.”

“I can find out which prison he’s in, but that’ll cost you.”

“The money isn’t an issue, but the situation needs to be handled discreetly. No one must know that my brother had been arrested.

“Tristan, correct? Why didn’t he give his name? Why tell the constables that he’s Jack O’Dare?”

Cress stared at him. For a moment, she looked so lost that he wanted to pull her onto his lap as he had done the week before and just hold her.

“My name is Cressida Darewood Lindquist. I am the Dowager Viscountess Schofield,” Cress said. “No one can know about this.”