Killer in the Outback

The Dreamtime and a Deadly Kiss

She’s a widowed, city-slicker businesswoman. He’s an enigmatic Aboriginal elder. Will they find the killer in the Outback before another murder is committed or will they be too late?

Traveling to the timeless Australian outback has long been on Diana Daniels’ bucket list. With her husband’s death now two years behind her, she heads off on a well-earned vacation to the ancient Kimberley region in northern Western Australia. Accompanied by Mimi, her zany, artistic sister-in-law, Diana plans to trek the imposing gorges, relax in her luxury cliffside retreat, and experience the enchantment of the Aboriginal Dreamtime.

But her plans are soon shattered when a young Aboriginal girl goes missing under suspicious circumstances. As if by design, Diana is commissioned by the girl’s grandfather, Tommy George to solve the mystery under the skeptical watch of the local police headed by Senior Constable Mitchell. Against the lavish backdrop of an international art festival and surrounded by a group of secretive guests, Diana finds herself running out of time. She knows a killer lurks among them, and it’s up to her to solve the mystery before more guests are murdered.

Killer in the Outback is the second installment in the Diana Daniels Mysteries. If you are a fan of Agatha Christie-style ‘whodunnits’ and page-turning plots, then you’ll love this clever, cocktail mystery by award winning author, Diane Demetre 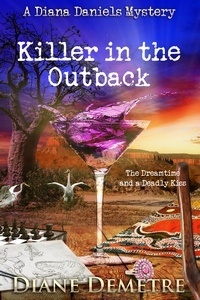 Killer in the Outback

More From A Diana Daniels Mystery 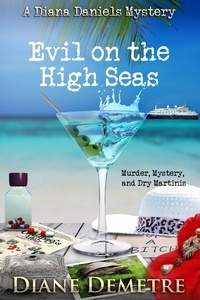 Evil on the High Seas
Diane Demetre
In Shelf
$2.99

With eyes as black as tea, Tommy George studies us over the rim of his cup. It’s the same expression I use when I want to unsettle candidates in interviews. He’s waiting to see how we react under his scrutiny. What are our motives? Can we be trusted?

When I meet his challenge, he slips off his tea chest and places his cup on the dusty earth. Squat on his haunches, he stretches out a gnarled finger and draws what looks like the image of a long-legged bird.

“Brolga . . .” He begins the story of a beautiful young girl, named Brolga who was the best dancer in her tribe. “One day an evil spirit, Waiwera decided he wanted her, and in a willy-willy wind, he took her away.” His finger swirls circles in the fine red soil, kicking dust in the air, just like the wind. “After days of searching, the tribe found her. They threw spears and boomerangs at Waiwera to get him to release Brolga. But the evil spirit decided that if he couldn’t have her, then her tribe couldn’t either. Waiwera vanished in a willy-willy” —more soil swirling— “and a tall, gray bird appeared, dancing long hopping steps, and stretching its wings. The tribe knew Waiwera had changed Brolga into a bird. The bird we know as the brolga.”

He springs to his feet and imitates the dance of the brolga. I can’t believe my good fortune. To witness this ancient story being told by a tribal elder framed against his ancestors’ backdrop sends shivers over my body. I want to applaud but refrain from doing so in case I insult him or the story.

“Thank you,” he says, obviously enjoying her effusive appreciation.

I join in the applause. “Thank you for sharing that story with us.”

He drops to the ground, his hand hovering above the earth as if he’s about to tell another story. But his body stiffens. His black eyes dart up and meet mine, and in them flashes fear. He rubs the patch of soil as if afraid to read its message and returns to his tea chest. Beckoning to his granddaughter, he draws her beside him, encircling her waist with an affectionate squeeze. “My Nellie reminds me of Brolga. A beautiful girl whose dancing is so graceful and special.”

“Know what?” An uneasy feeling flutters in my gut. Please, don’t go there.

“You have seen evil spirit, haven’t you?”

I watch as Nellie dismisses his warning as silly, but I sense the old man isn’t trying to terrorize her. He’s dreamed her future in the red earth of his ancestors.