Luna Alvarado loves her life. She runs a tea shop in the French Quarter of New Orleans that’s been in the family for years and is named after her grandmother. She’s developed a relationship with her customers and neighbors and built a beautiful life full of friends and exotic tea blends.

When a predatory corporate chain tea shop moves in just across the way, it undercuts her prices, steals her customers, and reduces her profits. When she’s approached with an offer to buy her out, she reluctantly agrees and schedules a business closing party for New Year's weekend.

When the party is crashed by Niall Lord, the owner of the chain of shops, things get awkward, but the alcohol continues to flow. Luna discovers a new definition of awkward when she wakes up in bed with Lord and he propositions her…become his fiancé and shield against man-hungry women around him. In exchange, he will return her shop and become a silent partner.

Can Luna keep the lie going long enough to save her shop? Can she stay in a phony arrangement without losing her heart? 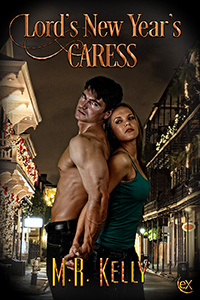 Cecelia Luna Alvarado, Luna to her friends, squinted against the harsh light beating against her half-closed lids. Her head lay on a thick arm, and another arm had her enclosed and pulled flush against the hard planes of a strong chest snuggled tightly against her waist. Luna flexed her fingers and spanned them across a muscular lower back, feeling the warm skin beneath her palm. She struggled to open her eyes again, but the pounding inside her head was like hammers banging against the inner walls of her skull, making her close her eyes against the pain.

“Yep, dreaming,” she moaned and turned over. Luna's stomach gurgled, rumbled, churned, and burned with a sharp, radiating pain.  Nausea slowly crept up her throat, threatening to spew from her lips. Her throat was rough and scratchy, like a cactus in need of wet, cool relief. Luna moaned. Her head was one big throb, and as she tried to raise it, the pain exploded. Luna's eyes refused to focus and she felt as if she had consumed a bottle of scotch instead of merely a couple glasses. Her hand was heavy and weighted as she tried to place it on her forehead, where she was sure her brains had been removed and replaced with cotton balls, needles, and pins.

Minutes later, Luna stretched, and her hand hit something big and meaty. She immediately became aware that she was lying on something not flat, which was really quite uncomfortable. She struggled to turn to her side and promptly shifted slightly to her knees, then turned to look at what she’d been lying on.

Her eyes widened when she found herself staring at a sleeping man—not just any man, her nemesis…the owner of Starline. She’d been lying on top of him.

Luna gasped as she lifted the comforter that was draped over his head and partially covered by the pillow. Yep. It was Niall Lord, the owner of Starline Teas. Luna covered her mouth with her hand. She couldn't believe her eyes. What the hell was he doing here, lying next to her—the man she despised most in the world?

She lifted the covers again, her eyes taking in a very naked Niall under the sheets, his firm round buttocks turned in her direction. Without his clothes, he looked more vulnerable than the last time she’d seen him. Well, she supposed anyone would look vulnerable when they were in bed…naked. Luna drew the comforter carefully off his broad back and held her breath when he turned over and grabbed for its corner. The thick sweater he’d worn the night before hid square pectorals, hard cut abs, and below the waist—packing. The thick rope of muscles twitched as his hand opened and closed, grasping for something that was no longer there.  The breath Luna hadn’t known she held slowly escaped her lips as Niall turned over on his side and threw his arm over his eyes, blocking the filtered light of the early morning sun through the sheer curtains.

Luna wondered what the hell had happened last night and grimaced as pain exploded at the back of her head and blurred images of the previous night flashed through her head…dancing with her friends…Niall Lord…who was not a stranger but was acting strange. Part of her couldn't comprehend what was happening, and the other half didn't care. Laci had whispered something in her ear about Starline, the corporation that had bought out her company.

Then the final vision was of Niall's embrace—

His arms wrapped around her as his lips consumed her own, dominating the kiss, her gaze dropping down to the front of his pants, the ridge of his cock outlined under the dark denim. He was thick and long, rising up along the side leg of his pants. The two of them in the darkened hallway leading outside the back of the club. Niall's hands gripping her hips, lifting her so their hips lined up.  The cool mist of early morning chilling the air around them, the warmth of his body pulling away as he pulled down the zipper, the sound resonating in the quiet night. Then the thick head of his cock as it brushed up and down the entrance to her pussy before he slowly pressed against her. His body was a thick intrusion as she moaned, afraid that he wouldn't stop to allow her to accommodate to his size and afraid that he would. Niall pressed harder into her slick cavity, his mouth covering her loud moan of ecstasy as he sank balls deep inside her overstretched pussy. Niall's gaze met Luna's as he withdrew a few inches and pushed forward slowly, stretching her further.

“I have never felt anything so delicious in my entire life. I want to spend the rest of my life wrapped inside you.”

Luna moaned, her legs locking around Niall's hips clinging to him as he controlled every movement of their bodies. He increased his speed, slamming against her hard until her back slammed against the wall, momentarily stealing her breath. But who needs to breathe when you are having the best fuck ever?

Bliss tore through her as she gasped. Her climax raged, and she screamed out from the intensity. Inside her, she felt his cock pump, a delicious throb inside her pussy, and he was coming. She could feel the warm jet after jet of semen shooting inside her, his shuddered release almost violent before he suddenly let Luna go and slammed his body against the wall next to her.

Then there was a blank.